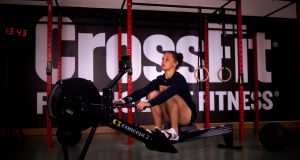 Emma McQuaid training at Trinity College gym: she has a gymnastics coach, a swim instructor, and a weightlifting trainer

Emma McQuaid has a gymnastics coach, a swim instructor, and a weightlifting trainer but she’s not indecisive, just one of the top CrossFit athletes in the world.

Currently ranked seventh globally and holding the fittest woman in Ireland title, McQuaid is on course for her second CrossFit Games this year.

But why so many coaches? Last year’s Games included legless rope-climbs, assault bikes in a race to burn 30 calories, toes-to-rings muscle-ups and a 40m sprint walking on your hands. Athletes went outdoors for a 1km swim immediately followed by 1km on a paddle-board; lying or kneeling on the board while paddling.

Are you keeping up? Because then there was weightlifting, a 6km ruck-run with weights of up to 23kg for women, rowing, the sled-push and climbing up a peg-board. And burpees, you can’t have a gym-inspired sport without burpees.

McQuaid says: “It was really cool to have the Ireland flag on your chest when we walked out on to the floor for the opening ceremony. I was the flag-bearer; it was just amazing hearing the crowd cheer whenever you walked out with the flag. It was unbelievable.”

From Lisburn, McQuaid has an Irish passport and qualified for the Games by winning the Irish Open. She’s represented Northern Ireland in other sports, but we will get to that.

The Open stages are video-based. Athletes record themselves under supervision doing set workouts to a timer and submit the video for judging. Not as straight-forward as it seems.

Five different workouts are emailed to every entrant at 01:00 Irish time on a Friday, with a submission deadline of Monday evening. McQuaid aimed to do her effort on Fridays, but wasn’t happy with her time at the first attempt this year.

“I did the workout again on the Monday, unofficially the best time in the world. I was pretty excited about that. Looked at my video, and I’d cut my head out,” she says.

Worried she might be disqualified as her face could only be seen when doing burpees, McQuaid did the whole thing again. Landed on the top of the leaderboard, driven by irritation, she jokes. The video is highlighted on the Games website.

Athletes can qualify by making National Champion, being in the top 20 worldwide or winning sanctioned events. Penalties are given to anyone not following procedures carefully. McQuaid lost points twice for starting incorrectly but still qualified with ease.

She says: “I held into the top 10 in the world for the full five weeks, which was a massive goal of mine for the last three years, it was really cool to achieve that.”

This is where the list of specialist coaches comes in, with each one tweaking her performance. A track and field specialist has honed her starts and turns, and the swim coach has her swimming efficiently.

But it’s the weightlifting coach who’s had the most dramatic impact. He was the first specialist she worked with after her trainer at CrossFit 8020 in Portadown said she could go far in her new sport.

From those lessons, she made the grade to represent Northern Ireland in weightlifting at the Commonwealth Games last year. Competing in the 63kg category, she came in a more-than-respectable fourth. She lifted a total of 182kg to the bronze medallist’s 206kg.

And clocked another injury unfortunately. In the past she’s torn her ACL playing rugby, damaged her shoulder badly enough to warrant surgery starting out in CrossFit but says every injury adds to her knowledge.

That now includes a recent asthma diagnosis, good for her health but bad for her nerves as doping tests are mandatory.

Two weeks ago she got that text with instructions on where and when to go for a test. She says: “I did panic a little bit. I was taking a blue inhaler, and it had to be below 1,600mg within a 24-hour period. So I rang my sports doctor.” He confirmed she was using the inhaler appropriately.

McQuaid came from quad racing, ranked top 10 in the UK and racing on the international circuit.

In a strange twist of fate, she discovered CrossFit while in America supporting her fiancé’s rehabilitation after he had a serious crash on a quad track. She spotted women doing a CrossFit workout in a gym and was instantly intrigued.

McQuaid says: “I was fit within quad racing, but definitely not fit within CrossFit, it was completely different.

“Whenever I did my first CrossFit class, I couldn’t do a pull-up on the bar. I was pretty rubbish at most things, I adapted all the way.’’

She’s kept her love of outdoor sports though, mixing kayaking and trail-running with her paddleboard workouts.

But ever the evangelist, she stresses the differences between CrossFit sport and CrossFit for fitness. She says it’s about scale, that workouts are adapted with elements added in or left out.

Dubliners can try the sport now at Trinity College’s public gym, with classes run by Chapter 2 Fitness and launched by McQuaid.

“My mum could do it. I would quite happily and safety send my mum to it, literally any age of a person can do it, it’s completely adaptable,” says McQuaid who has got her sister into the workouts after a 20-year break from sports.

But following McQuaid’s routine at CrossFit Berserk in Belfast is probably not recommended as she goes for an even better placement next year.

“I’ve always dreamed of representing Ireland so it’s a huge opportunity for me,” she says. “For August the goal is to place inside the top 10. That’s the dream for everyone in the sport, to be inside that top 10 at the CrossFit Games.”