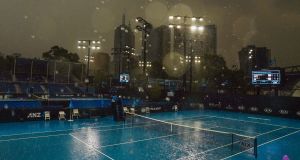 Like farmers in a drought peering into an unforgiving sky, tennis turned to the heavens – and Roger Federer – to break the iron grip of heat and smoke choking the 2020 Australian Open into near paralysis. And their prayers were answered.

Until late Wednesday afternoon, the tournament was a slam without a dunk, sweating in limbo and hoping all would be well before the curtain goes up on Monday. The tournament, the city, the nation needed a miracle of sorts – and a thunderstorm rolled through town to blow their cares away. There is more on the way, maybe enough to put a smile on this tournament after days of worry and doubt.

To celebrate the arrival of a belting storm that rumbled on for hours, Federer, Rafael Nadal, Novak Djokovic, Serena Williams, Caroline Wozniacki and a slew of stars fooled around in a lighthearted exhibition in Rally For Relief under the roof in the Rod Laver Arena to raise money for bushfire victims. If they’d open the roof and let them roll around in the rain, nobody would have minded.

But there was rancour still. Step forward for a rare moment in the spotlight, Brayden Schnur, the world No 103 from Canada, who complained of “super dryness” when beating Austria’s Sebastian Ofner, and reckoned the game’s elite players should have made serious noise about the heat and toxic air they had to endure.

“It’s got to come from the top guys,” he told Australian Associated Press. “Roger and Rafa are a little bit selfish in thinking about themselves and their careers. Because they’re near the end and all they’re thinking about is their legacy, they’re not thinking about the sport itself and trying to do what’s good for the sport. They’re just trying to shove us on the court because we’re qualifiers.” This ignores the fact that those courts are where qualifiers invariably play before slams, whatever the conditions.

Then the thunderstorm rolled into town like a bad guy in a black hat, the most welcome of villains, and everyone was glad of the elemental power that might yet wipe away the fires still smouldering and spitting like tigers across the continent, and concentrated lately in the southeast corner.

Only a short drive away from the state capital, in the border mountains, lives and livelihoods remain at risk. One estimate put the eventual nationwide cost of this calamity at A$200 billion (€123.9bn). It is a blow to the country’s solar plexus like no other since wartime, and it is far from over.

Trying to squeeze a mere sporting event into this narrative seems absurd, but the tournament and the players have done their best to get the moral tone right. The official daily tournament bulletin – “Conditions at Melbourne Park are being constantly monitored” – reads like the famous “we’re watching you” finger-wagging of the Skibbereen Eagle to the Russian Czar in 1898.

Local meteorologist Jane Bunn eloquently pronounced before the cleansing downpour: “4.10pm: It’s a beast, and it’s headed for the city. This is a huge, dangerous storm cell, with torrential rain likely to cause flash flooding. It may also bring large hail.” A more moderate view is that steady rain over the next few days should be enough to calm nerves and soothe a parched and grateful city. Elsewhere, rain stopped play in Tasmania, and 2016 Australian Open champion Angelique Kerber had to quit with an injury when trailing the Ukrainian Dayana Yastremska 3-6 0-2 in Adelaide. She must be doubtful for Melbourne.

Meanwhile, senior Bureau of Meteorology consultant, Kevin Park, gave others hope. “We’re quite optimistic that come Sunday, Monday, instead of this shower and storm activity which can be hit and miss, we’ll see wider areas of the state receiving much useful rainfall.”

Tennis Australia, while reluctant to pronounce definitively on the threat of lung-cramping smog, have nevertheless done their bit. Players over the past two weeks, at the instigation of Nick Kyrgios, have hit 3,717 sponsored aces, raising A$2,838,390 (€1.76m) for bushfire relief. That figure rose to €2.97m after Rally for Relief.

In one of their own videos, Tennis Australia announced Wednesday’s event thus: “The fires across Australia are some of the worst ever seen with tens of thousands of people, properties and wildlife directly affected. Millions have banded together to show their support, and now the biggest names in tennis are joining the cause.” Federer, the sport’s pope, urged his flock to “come and join us”. They did, just about packing out the arena.

For Federer, Melbourne and Australia have always been an emotional as well as professional destination. His family briefly considered emigrating when Roger was in his early teens, and an early mentor, the late Peter Carter, came from Adelaide. The Swiss has won six of his 20 slams here, most recently two years ago.

“I always try to remind myself that this is always what I’ve wanted to become,” he says. “I try to simplify things in the head, and remind myself what a privilege it is that I’m doing what I’m doing at these later stages of my career. Like everybody else, I have to win seven matches, best of five-set matches. It’s a lot of tennis.”

A lot of tennis is what any fan would settle for right now. Even Brayden Schnur would agree with that. – Guardian

1 Seán O’Brien: Anger over my parents’ break-up never left me
2 Will Connors chops his way to the front of Ireland’s openside queue
3 Plenty of positives for Farrell as Ireland hit the ground running
4 Ireland braced for a daunting assignment in Paris
5 Lifelong dream finally comes true for emotional Ed Byrne
Real news has value SUBSCRIBE