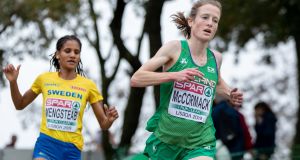 It’s an indication of both the longevity of her sporting career and the consistent success she has enjoyed through the years that Fionnuala McCormack collected her first Sportswoman of the Month award as far back as December 2006, after she had taken silver in the under-23 race at the European Cross Country Championships.

A whole bunch more awards since, and now she is our December 2019 winner after leading the Irish senior team to silver at the same event.

Through the history of the awards there’s only a wider gap between Katie Taylor’s monthly prizes, her first coming in May 2005, her most recent in June 2019.

And no more than Taylor, McCormack is far from finished, her 2020 schedule including the small matter of her fourth Olympic appearance, a feat only achieved by two other Irish sportswomen, Sonia O’Sullivan and Olive Loughnane.

And she qualified for Tokyo in style too by knocking almost four minutes off her personal best when finishing fifth in the Chicago Marathon last October in a time of 2:26:47. Only two Irish women have run faster, record holder Catherina McKiernan (2:22:23) and Sinead Diver (2:24:11).

A month later the Wicklow woman won her ninth national cross-country title, the day made all the more special by her sister Una Britton joining her on the podium after she took bronze.

Come December and McCormack she was off to the European Cross Country Championships again, an event she memorably won in successive years in 2011 and 2012.

In what was a record 16th appearance in the event, one more than any other woman, and a record 38th senior appearance for Ireland, McCormack came agonisingly close to adding another individual medal to her collection. However, she missed out on bronze by just two seconds having led the chase for third for much of the race, Sweden’s Samrawit Mengsteab overtaking her half way around the final lap.

It was, much to her frustration, the fourth time she had finished fourth in the race.

However, she was not to leave Portugal empty-handed, her run, combined with top 20 finishes from Aoibhe Richardson (17th) and Ciara Mageean (20th), enough to seal team silver, Ireland finishing behind Britain and ahead of Portugal. (And with Stephanie Cotter winning bronze in the under-23 event, that effort along with Omagh twins Eilish and Roisin Flanagan finishing ninth and 17th enough to earn another team silver, our cross-country future looks decidedly rosy).

It was a brilliant effort from the trio, with Una Britton, Fionnuala Ross and Mary Mulhare also earning silver. Mageean, who collapsed over the line, describing it as “probably” the toughest race of her life.

“Absolutely horrible,” she said of the final 400m. “But to know I was in a fight for a silver medal for Ireland was all the ambition I needed to get across that finish line.”

“Not the individual result I wanted, but the team one makes up for it,” said McCormack, who has yet another European Cross Country medal to her name – and yet another Sportswoman of the Month award.