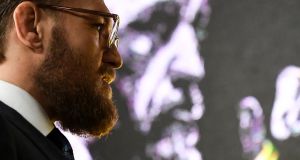 Since Conor McGregor last fought in the octagon, as opposed to in bars, the game has changed. Photograph: Kirill Kudryavtsev/AFP via Getty Images

During last weekend’s NFL play-offs, one of the commercials in regular rotation advertised the return of Conor McGregor at UFC 246 in Las Vegas this Saturday night. It was a predictably slick sales pitch from ESPN, a couple of family-friendly sound bytes from the man himself, boldface statements calling him, “The most loved, the most controversial, the most notorious”, and well-chosen highlights showcasing a ruthless competitor and a bit of a scoundrel. All of this merriment sound-tracked by Eminem ominously rapping, “Guess who’s back? Guess who’s back?”

Watching it made you wonder about the creatives involved in its production. Did they ever discuss the elephant in the room, the New York Times story that, as Americans, they all read even if Irish media outlets are not allowed to report it? Was anyone troubled by the fact his last fistic outing was against an unsuspecting middle-aged man who had the temerity to reject his whiskey in a Dublin bar? Presumably, nobody brought up the possibility of adding a touch of cinema verité to the ad, using security cam footage of him injuring innocent peers in the Brooklyn bus attack or stomping on a fella’s phone down in Florida?

In the dystopian sports world of the 21st century, promoting this contest like just another bout is more evidence of the normalisation of grotesque, the monetisation of scandal, and the selective myopia of vested commercial interests. Witness ESPN’s clever decision to resurrect Without Me, an old Eminem cut. No accident there. The perfect choice for the UFC’s target twenty- and thirty-something demographic. They were adolescent boys when Marshall Mathers was in his offensive pomp, the scourge of middle America with his outrageous antics, homophobic lyrics and oversized pants.

Now, they are adolescent men in a country long since shock-proofed by the election of a president on record discussing in lurid detail his preferred method for conducting sexual assault. At last count, more than 20 women allege Donald Trump has attacked them in this way yet it’s scarcely ever mentioned these days. Against that background, it’s hardly surprising few batted an eyelid last year when UFC promoted bouts involving Greg Hardy and BJ Penn, despite one having a domestic violence conviction and the other a restraining order from an ex-wife citing physical and sexual abuse. What might once have been disqualifying and career-ending is now just added storyline.

Since McGregor last fought in the octagon, as opposed to in bars, the game has changed. UFC switched from Fox over to ESPN, a network paying $750 million (€672 million) over five years for the privilege. When they forked over that money, the so-called worldwide leader in sport probably did not expect to have to wait 12 turbulent, nauseating months for their first chance to promote the Dubliner, the UFC’s reigning cash cow. Now their opportunity has finally come, they have upped the pay-per-view price from $59.99 (€53.76) to $64.99 (€58.24) and gone full shill on his behalf.

Money explains why ESPN and, indeed, UFC have chosen to ignore McGregor’s, ahem, legal issues and sought to prove the principles of sportswashing can be applied to individual careers as well as to dodgy Middle Eastern potentates. The top five UFC pay-per-views of the last decade are McGregor bouts, all of which dwarf the biggest selling show of the past year, a clash between Jon Jones and Anthony Smith that brought in 650,000 buys. A respectable figure, yet a quarter of the number that purchased Khabib Nurmagomedov’s humbling of the Irishman 15 months ago.

A stark illustration of his box office power, this is why Donald “Cowboy” Cerrone is not in Las Vegas this weekend to win. A few weeks short of his 37th birthday, he’s there to pocket $2 million (€1.7 million), the largest purse of his career, and to lose in order that the hype around McGregor can be ratcheted up ahead of the next pay-per-view against a slightly more credible opponent. The commercial that aired during the NFL games didn’t even mention Cerrone’s name or show his face. Why would it? He’s a patsy, an incidental character in the script because he doesn’t move the needle or put bums on seats.

No, this is all about McGregor, the rehabilitation tour. All aboard for seats on the sanitising of his reputation express. In sycophantic tone and sympathetic questioning, his soft-focus interview on ESPN last Monday was eerily redolent of the studies in confirmation bias that Trump occasionally does with Fox News Channel. Indeed, the stilted version of McGregor on view also sounded about as genuine and authentic as those fleeting cameos when the president is put in front of the camera and forced to read off the teleprompter instead of naturally ranting off the cuff.

Maybe this sleight of hand works. Perhaps there are enough gullible fools out there willing to swallow McGregor’s faux new age aphorisms, this supposedly chastened, curiously decaffeinated version of himself, replete with a less than convincing assertion that, in good time, all allegations against him will be proven false. Still, can’t help thinking ESPN missed a trick by not playing more of that Eminem song in the commercial, especially the bit that goes . . .

“So let me just revel and bask

In the fact that I got everyone kissing my ass

And it’s a disaster, such a catastrophe

1 David Clifford sends everyone back to their corners unbeaten
2 Mike Catt hopes to have Irish backs purring in Six Nations
3 Six Nations: Ireland are contenders but England still the team to beat
4 In Donegal Michael Murphy is seen, simply, as a godsend
5 Liam Cahill uses playing regrets to drive him as Waterford boss
Real news has value SUBSCRIBE