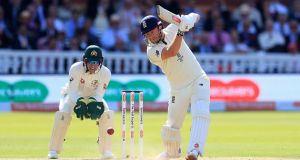 The shirts were a sign that Lord’s had embraced the Ruth Strauss Foundation as enthusiastically as everyone had hoped – more than £382,000 had been raised by the close of play.

The faces belonged to those inhabiting the England dressingroom in mid-afternoon as their innings was in freefall. From the relative security of 92 for two they slumped to 138 for six on an unusually brown Lord’s surface by the standards of 2019.

Any blushes were tempered a little by a half-centuries from Rory Burns at the start of the innings and Jonny Bairstow at the end.

There was also the comfort of another cheap dismissal of David Warner in the final hour as Australia scrapped and scraped to 30 for one at the close in a manner that suggested that there is still plenty of time for there to be a result. The bat does not prevail quite so easily at Lord’s these days.

The first hour was extremely testing especially when the recalled and rejuvenated Josh Hazlewood was marching in from the Nursery End after Tim Paine had opted to field first after winning the toss, probably not a straightforward decision.

It took Hazlewood three balls to dispatch Jason Roy: a swish, a play and miss and then a fatal edge to the wicketkeeper. Dismissed for a duck by 11.10am on what is effectively the first morning of the Test it becomes a very long, agonising match for an opening batsman, even one like Roy, who sometimes seems oblivious to pressure.

What followed was a reminder why the modern batsman is hesitant to volunteer to bat at three. Hazlewood in particular hit the seam and the ball jagged down the slope. Rory Burns and Joe Root had to battle hard to survive, playing late and leaving whenever possible. Soft-handed edges fell short of the slip cordon on a surface devoid of pace but offering early lateral movement.

Like so many great players, Root likes to play off the back foot whenever possible but early in his innings that can be his undoing. Hazlewood managed to move a ball up the slope and the ensuing lbw appeal was granted on a day when the umpires’ decisions kept being vindicated. Root, correctly, was not minded to review. LBW is becoming an increasingly common mode of dismissal for the England captain.

In the second hour the ball began to behave and Australia squandered a chance when Usman Khawaja spilt a simple catch in the gully after Burns had sliced against Peter Siddle. With relative tranquillity Burns and Joe Denly took the score to 76 for two at lunch. Then, having batted pleasingly, rather like an understated James Vince, Denly pushed and edged against Hazlewood on 30.

Jos Buttler had the bonus of getting off the mark with a five, courtesy of four overthrows, the first Englishman to do so since Cyril Washbrook in Sydney in 1947; we may surmise that the cheers were not so audible then. But this was not the prelude to a Buttler innings of note. Soon he was caught behind off Siddle.

The dilemma for Buttler is that he is trying to play the type of innings that has been alien to him throughout his career. He is unaccustomed to being a dogged middle-order accumulator in any form of cricket. He is attempting to bat so responsibly but he is not an especially good defender. He may have to take another look at the scrawl at the end of one of his bat handles.

Immediately Ben Stokes was lbw sweeping against Nathan Lyon, who found a surprising amount of turn and the innings was in disarray on what now seemed a more blameless track.

Bairstow, though out of sync at the start, fashioned a mini-recovery. The freedom/necessity to bat positively at seven helps him as did a couple of crisp drives against Siddle. Chris Woakes was as compact as anybody – until a bouncer barrage from Pat Cummins after tea.

Woakes top-edged a hook shot fine for six and tried to look nonchalant. Then he ducked into a less short delivery and was struck on the helmet. There was the statutory delay to check all was well with Woakes and for his helmet to be replaced. When play resumed he seemed unnerved; there was a swot, then a swish that led to his dismissal as the ball brushed his glove as it headed down the leg side.

Jofra Archer, Stuart Broad and Jack Leach hung around long enough for Bairstow to post his 50, his first excursion into double figures in Test cricket this summer. There were signs the old fluency was returning until he attempted to wallop a Lyon off-break into the grandstand. He only managed to find Khawaja at deep square leg but at least England had crept to a disappointing total rather than a disastrous one.

Archer, rather than Woakes, shared the new ball with Broad and he impressed but it was the veteran who managed to bowl Warner through the gate. This is the third time Broad has disposed of Warner this series (for 11 runs), which is quite an advance given that he had not dismissed him once in the last two Ashes series. – (Guardian)

1 Shock at golf clubs as sport faces shutdown in Level 5
2 Molde turn up the heat in the second half to dim the lights on Dundalk
3 Dan Leavy could make Leinster return against Zebre
4 GAA scrambling to deal with GPA demand for ‘baseline testing’ of all county panels
5 Level 5 golf shutdown: Ireland one of few countries to close courses
Real news has value SUBSCRIBE