Australian Grand Prix set to be rescheduled due to Covid

Many countries have shut to travellers from Britain, where seven teams are based 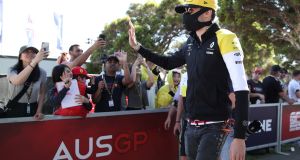 The Australian Formula One grand prix in Melbourne looks set to be rescheduled from its season-opening slot to later in the year due to Covid-19 and a tightening of local quarantine rules.

Tickets for the March 21st race at Albert Park have yet to go on sale.

A Formula One spokesman, asked on Monday about media reports of a likely postponement, said the sport looked forward to racing again in March. He did not specify where, with Bahrain’s Grand Prix also scheduled for March.

“In 2020 we proved that we could return to racing safely and delivered what many thought was impossible in March,” he said. “We have set out our 2021 calendar and look forward to the return of F1 in March this year.”

Local organisers in Melbourne were not immediately available for comment but various reports said a postponement, rather than a cancellation for the second year in a row, was likely to be announced later in January.

Construction work to erect fences and grandstands around the temporary street circuit would normally start by the end of the month.

Last year’s Australian grand prix was called off only hours before first practice was due to start at the Albert Park street circuit, when a McLaren team member tested positive to the virus.

The season eventually started in Austria in July, with the calendar heavily rescheduled and reduced from an original record 22 races to 17 in Europe and the Middle East.

Bahrain’s Sakhir circuit, which is due to host round two on March 28th, ended up hosting two races at the end of November and in early December.

Teams, drivers and travelling media had to test negative before travelling and again on arrival, with a short quarantine until the results were known.

Melbourne would involve a far longer period of mandatory isolation.

Hundreds of top tennis players, expected to arrive in Melbourne in mid-January, will have to spend 14 days in quarantine before the February 8th to February 21st Australian Open.

Seven of Formula One’s 10 teams are based in England, where cases are surging due to a highly infectious new variant of the coronavirus. Many countries have shut their borders to travellers from Britain.