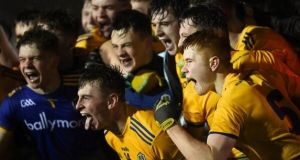 Roscommon minors celebrate their victory over Sligo in the Connacht final at Bekan.

Nothing captured the strangeness of life as an Irish secondary school student in 2020 as the images from the last Gaelic football match of the year.

You probably missed it as you raced through the haze of gift-wrapping and Christmas dinner preparation while trading cocktail-recipe tips with friends on Whatsapp and perhaps fretting for your job or other family members and anxiously watching the latest Nphet headlines on the news, pretending things are normal and all the time ignoring the uneasy feeling that the world is still riding a tricycle across a rope slung over the Grand Canyon with no safety net.

So you probably missed the U-17 showdown. But it took place on a wild, darkening afternoon in Connacht a week ago, featuring the young teams from Roscommon and Sligo. This was a novel pairing; both had broken through the oppressive ranks of Galway and Mayo.

Needless to say, there were no spectators, no proud Mums or dads berserk with nerves. And naturally, it took place in a bode-fide, Met-Éireann approved storm: Bella was passing over the field at Bekan that afternoon.

Sligo hadn’t won a title since 1968 but because of the weather couldn’t register a score until the 55th minute, a crushingly disappointing experience in its own right. They mounted a late charge but the game finished 1-5 to 1-2, in the velvet interior darkness, with no supporters, in a gale.

Since September, they’ve been preparing for the biggest exam of their life in conditions that are miserable and joyless and unrelenting

It was a fitting close to the most surreal year in the long history of the GAA. There’s a photograph of the Roscommon captain holding the cup to the backdrop of an empty stand through which masked and hooded stewards walk. It’s sci-fi meets the sports pages of the Roscommon Herald.

And those players can count as the luckiest teenagers in Ireland this year. At least they managed to experience some sort of escapism and to realise their ambitions through what has been a desperately limiting and thwarting 12 months in which to be growing up.

Some of those players will be scheduled to sit the Leaving Cert this summer. When the pandemic announced itself early last March, there was, quite rightly, considerable sympathy and reflection on the hugely stressful effect on the Leaving Cert class of 2020. After several months of hand-wringing and ifs and buts, the exams were cancelled and predicted grades used for the first time in the history of the State. And the vast majority of those students have since moved on to college under hugely strained and restrained and unnatural conditions.

But the strange thing is that since there has scarcely been a word about the realities of life for Leaving Cert students across Ireland this year. There hasn’t been any Government guidance about the class of 2021. Since September, they’ve been preparing for the biggest exam of their life in conditions that are miserable and joyless and unrelenting.

There is nothing. No school sports. No school dramas or musicals. No dance clubs or debating or orchestras or school radio or science clubs

There’s always been a contradiction about Irish school life. Everyone knows that the Leaving Cert exam system is deeply flawed: that for its success in pounding the info into students, it is absurdly reductive to cram the two years the teacher spends educating and working and developing their students into a three-hour written exam, a task to which some people are simply ill-suited. But ‘school’ has never just been about the exams.

As anyone who left their school five or ten or 40 years ago will know, their recollections will lean to random stuff rather than the official point of it all – the magnified silence of those big dusty gyms ominously lined with geometrical (and deeply uncomfortable) desks and chairs and the ceremonial distribution of papers taken from locked boxes.

Any school in Ireland with, say, 600 kids, is absolutely nuclear with potential and ability. The exam system is predicated in identifying only one narrow and particular kind of talent. It’s very often the teaching staff that will notice the other hidden potential and abilities and interests and can set students in a certain direction that will have a big bearing on their later lives.

The point of school is learning to muddle through with the hundreds of others with whom you find yourself because you were all born that same year. And you end up becoming friends with some and others you may never, after the last day, see again for the rest of your life – and there’s something haunting about that, too. But schools teachers organise the stuff that is invaluable in helping students cope with the grind and constant tedious pressure of the Leaving Cert year.

And all of that has just. . . Stopped. There is nothing. No school sports. No school dramas or musicals. No dance clubs or debating or orchestras or school radio or science clubs. No senior ball or debs, or whatever it’s called now. No hanging about town on weekends. No going out at mid-term breaks or Christmas. No summer plans to make. No music festivals on the horizon. No doing stupid foolish things.

Across Ireland, once the schools reopen, the harassed warning to don’t forget your lunch has been replaced by don’t forget your mask. They are masked and separated on the school bus. They are masked in school. They are sequestered into groups. The secondary school nearest me has over 1,000 kids coming in every day. They’ve somehow managed to get through half the calendar year keeping the virus out of the school. It’s been an absolute triumph of dedication and discipline on the part of the teaching staff.

And it’s been a triumph of spirit on behalf of the students, too. Anyone who works in secondary schools or drops their children to the gates will see it daily. They just get on with it. Their energy and mischief is the same as ever. There has been no griping or moaning.

Some 55,000 young Irish people are experiencing a year that has been relentlessly punishing

The same is undoubtedly true in schools all over Ireland. But there is a deeply saddening aspect to the grey sameness of life for Ireland’s class of 2021. Last March, the virus surged from nowhere and sent into a tailspin a school year that had, until that moment, been progressing normally for the class of 2020.

This year’s class masked up and have been slogging through the teeth of the virus since September. They’ve been moving through an atmosphere that is contrary to the normal school experience. As it stands, their return to school has been delayed by a week and questions are already thickening about the fairness and wisdom of asking them to sit exams after an incredibly draining year.

When you hit your 20s, the future stretches infinitely ahead. And people past the age of retirement are already beginning to look ahead to better times once this pandemic has been controlled by vaccinations and the old assumed western world luxuries and comforts return.

But there is something indelible and irreplaceable about the last couple of years of your time in school. And some 55,000 young Irish people are experiencing a year that has been relentlessly punishing.

And the striking thing, the truly heroic thing, is that they are doing it with no complaint. Listen after the school bell and you’ll still hear their laughter.

More than anything, their spirit and brightness is a source of optimism as we stagger into 2021, under siege and under lockdown.