America at Large: Loeffler’s political ambitions a bad Dream for her players 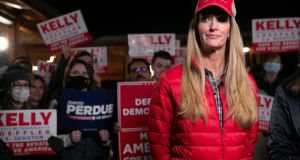 At a campaign event in Dawsonville, Georgia earlier this month, Republican senator Kelly Loeffler posed alongside Chester Doles with a smile on her face and a cap emblazoned with an American flag on her head. Fifth-generation KKK, Doles has one tattoo of the swastika, another that reads “WHITE POWER”, and a résumé that includes almost beating a black man to death and an appearance alongside neo-Nazis at the 2017 Unite the Right march in Charlottesville.

While Loeffler immediately claimed to know nothing about the man who asked for a picture, it was not his first appearance at one of her rallies nor her first flirtation with white supremacists during her campaign for re-election to the US Senate. Aside from giving interviews to racist conspiracy theorists, she has also denounced the Black Lives Matter movement and slagged off black churches. All of which may explain why the predominantly African-American players of the Atlanta Dream, the WNBA team Loeffler owns, have spent much of the last five months working steadfastly for her opponent, Reverend Raphael Warnock.

“After a phone call with him, we could see how passionate he was about fighting voter suppression and advocating for those who are marginalized,” wrote Elizabeth Williams, a centre with the Dream. “The fact that Dr Warnock was even willing to have a conversation with us at all was huge. I haven’t heard anything from Senator Loeffler . . . If she did reach out to me, I’d tell her that the Black Lives Matter movement is meant to unify. It’s about being a voice for the voiceless in all facets of life, including, yes, sports. We won’t just ‘shut up and dribble’ anymore.”

Many pundits believe the outsized influence of Williams, the Dream and the rest of the WNBA, wearing “Vote Warnock” T-shirts on television and constantly endorsing his candidacy in the media, contributed to Loeffler failing to get above 50 per cent in order to hold on to what has traditionally been a Republican seat back on November 5th. As a result, Warnock, attempting to become the first black senator from the state, and Loeffler now go head to head in next Tuesday’s run-off election.

That Williams’s latest social media video supporting the preacher was posted from Ankara in Turkey sums up how brave she and her peers were in choosing to go public against their club owner. Earning a fraction of what their male counterparts draw down, the best players in the league must supplement their income by spending the off-season playing in Europe.

Even in a year that will be always remembered for athletes across the world collectively flexing their protest muscles, the stance taken by the denizens of the WNBA was notably different. Very few of the men participated knowing that doing so was jeopardising their livelihoods and already precarious financial situations. For instance, LeBron James et al had the backing of their club owners every time they spoke out or took a knee. Ominously, Loeffler remains the boss of the Dream, retaining the power to hire and to fire these women.

The 50-year-old bought into the club 10 years ago following a chance meeting with one of the owners during a pre-season friendly between Manchester City and Club America at the Georgia Dome. A hugely successful businesswoman, whose husband ended up becoming the chairman of the New York Stock Exchange, she wanted a way to rekindle her teenage love affair with basketball. At high school in rural Illinois, her gangling frame used to take so many pratfalls on the court that team-mates secretly nicknamed her “NBC”, the letters standing for new-born calf.

Loeffler grew up in farming country where her family owned 1,800 acres of soybean and corn, a prosperous enterprise that makes a mockery of her recently claiming she understands mendicant constituents struggling from paycheck to paycheck. Bizarre stuff from a woman with a personal fortune north of half a billion that makes her the richest person in the Senate. Then again, much about her recent political metamorphosis into the darling of the alt-right fringe and the white supremacists is difficult to figure out.

When she purchased her share of the Atlanta Dream, she knowingly bought into the WBNA, a league that has famously been one of the most progressive in America, particularly on racial and LGBTQ issues. Under her watch, the players were initially given better housing and invited to lavish dinners at her Tuxedo Park estate while the club also enjoyed a fruitful partnership with Planned Parenthood, the reproductive rights non-profit that is permanently on the hit list of the Republicans.

Her profile was that of a centrist in her party, a Mitt Romney supporter who, tellingly, refused to contribute a cent to Donald Trump’s run to the White House in 2016. Only when Governor Brian Kemp appointed her to fill Johnny Isakson’s newly-vacant Senate seat 12 months ago did she mysteriously morph into Trump’s female doppelganger, replete with an insider trading scandal. Like the president she instantly claimed to support on every hot button issue, she suddenly staked out the most extremist positions on gun control, abortion, trans rights and immigration.

“We need to have conservative voices in sports,” said Loeffler, responding to calls she should sell the Atlanta Dream. “We need to have room and tolerance for all views in sports and not make people feel excluded.”

The exact reasons why the players who know her best are shouting “Vote Warnock”.