View from the Couch: It’s the supporters not the ‘elite sportspeople’ who generate the thrills 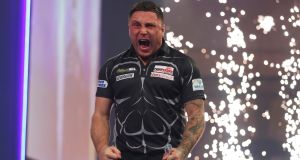 For a good many of us, it’s not Auld Land Syne that truly signifies the shift from one year to another, it’s the closing rounds of the darts at the Ally Pally, featuring, as it does, the only elite sportspeople on Earth who largely live like the rest of us. And think Joe Wicks is someone who works as a barman in the Queen Vic on Eastenders.

Take Gerwyn Price, for example. How would he prepare for the final? “I’ll go back to my room, spend 12 hours doing nothing, watching Netflix and stuffing my face with doughnuts and kebabs.”

No ice baths or sports psychology sessions for Gerwyn, then. His nickname should, therefore, be “Mr Relatable”, and not “The Iceman” which, naturally enough, led him to choose Ice Ice Baby as his walk-on tune.

And, in the end, his routine worked as he went on to see off Gary Anderson 7-3 and claim his first world title.

Daryl ‘SuperChin’ Gurney walked on to Sweet Caroline for his quarter-final against Gerwyn and the experience was a bit too eerie, like the ghost of Ally Pallys past

And while we should be well accustomed by now to the absence of real supporters from sporting events, their absence from the Ally Pally has been a tragedy of epic proportions. There is literally no other sport that suffers as much from having no actual people in the crowd as darts.

It’s not just the noise that you miss, it’s the crowd signs too, ones like “My pen has run ou”, and the marginally obscene sketches that the camera lingers on until realising what they’re seeing, prompting them to hastily switch to a slo-mo replay of a treble-20 like VAR might intervene upon noting that the dart brushed, say, against the chucker’s armpit.

Daryl “SuperChin” Gurney walked on to Sweet Caroline for his quarter-final against Gerwyn and the experience was a bit too eerie, like the ghost of Ally Pallys past. If there were real people there, lager would have showered the place as glasses were plunged in to the air for the “Uh, uh, uh!” bit. Instead, SuperChin wandered lonely as a cloud towards the oche, the only excitement generated by the four scantily clad cheerleaders on the stage.

But we’re using the “excitement” word loosely here. That’s not to denigrate the efforts of the cheerleaders who must have been close to contracting hypothermia in the cavernous hall, but their hearts just didn’t seem to be in it, the quartet limply thrusting their pom-poms in the air with the same rhythm, regardless of whether it was Ice Ice Baby, Sweet Caroline, Gary Anderson’s Jump Around or Chizzy Chisnall’s Dizzy. And you don’t need to be a Strictly Come Dancing judge to know that those tunes each demand a different routine.

The cheerleaders didn’t seem to care, though, maybe still smarting from the cancellation of their Strictly Come Dancing on Lino Christmas gig in Skegness, so they just gathered their pom-poms and trooped off the stage, leaving the arrowsmiths to do their thing.

It was Gerwyn who ended Ireland’s interest in the competition when he ousted SuperChin, but when he talked to Sky after his triumph, you’d have assumed he’d be mullered.

Anderson has his own history, the peak point being ‘fartgate’, when a deeply unpleasant odour filled the air during his 2018 Grand Slam clash with Wesley Harms

“I couldn’t hit a barn door,” he sighed. “I’m just overthinking things at the moment, I probably want this a little too much. I can’t imagine how my wife and kids feel back home, I apologise to them because I’m putting them through the wringer week in, week out.”

The Sky person suggested to Gerwyn that he was being too hard on himself, because, well, he’d won, but Gerwyn was having none of it: his performance left him gutted.

No boos is bad news

There’s a backstory here, though. Gerwyn has long since been dubbed the “bad boy” of darts and has struggled to gain the love of the crowds, the Sky panel reckoning that him reaching this world final was in no small part down to the fact that there was no one in the Ally Pally to boo him.

Gerwyn has been fined in the past for bringing darts into disrepute, his offences including unruly celebrations, slow play to put his opponent off, and verbal altercations. For a lad who used to be a rugby player, he was at a loss to understand why any of these things was bad.

Anderson, his opponent in the final, has his own history, the peak point being “fartgate”, when a deeply unpleasant odour filled the air during his 2018 Grand Slam of Darts clash with Wesley Harms. “It’ll take me two nights to lose this smell from my nose,” said Harms after his defeat, although Anderson categorically insisted that the gas had not emanated from his bottom. “If the boy thinks I’ve farted, he’s 1,010 per cent wrong,” he said.

That incident, though, has hung over Anderson like a bad smell, so this meeting in the final with Gerwyn was a redemption opportunity. In the end it was Price who came out on top and we can confidently state that the cheerleaders responded to the occasion with a shrug and a “meh”.