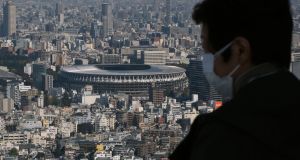 The National Stadium in Japan, the main venue for the 2020 Olympics. Photograph: Kazuhiro Nogi/Getty/AFP

Do you know how many days there are until the Olympic Games get under way? Precisely 200. Imagine it. The darkness of the Tokyo skyline. A lone runner scampering up a giant staircase, torch in hand. A roar from the 60,000 fans inside Japan’s National Stadium. Then raging illumination. It will be some sight … if it happens. Meanwhile this year’s other sporting mega-event, football’s European Championship, is barely five months away, but still there remains an expectation that millions of fans will be able to travel safely to 51 matches across 12 European cities.

Back in the real world, Japan has shut its borders until the end of the month, the Tokyo metropolitan government has asked the central government to declare a state of emergency, and most of Europe is in ever-tighter lockdown. Increasingly it feels like an act of faith, rather than science, to expect the Olympics and Euros to take place with every familiar frill, as if the last 12 months were just a bad dream. Already there are echoes of the great shutdown of 2020. The World Athletics Indoor Championships, scheduled for China in March, have been pushed back again.

The British Boxing Board of Control has cancelled all fights in January, while the English football fixture backlog is growing by the day. The Lions’ tour to South Africa is also in doubt, with all parties agreeing that a tour without hordes of travelling fans is neither desirable nor commercially viable. In fact, as we slip into a new year it is time to confront another hard truth. The sporting landscape is looking a lot more 2020 than we were expecting a month or two ago – but with a brutal twist: it looks like it will be those at the grassroots and community level, and the poorest and most marginalised, who will suffer most of all.

On the plus side, several sources inside the International Olympic Committee and British Olympic Association insist that the Tokyo Olympics will take place in some form in 2021, despite the challenges of 11,000 athletes from across the globe congregating in one place. There is simply too much money at stake for it not to happen. The same surely applies to the Euros. But both events are likely to be pared back and stripped of many of the peripheral joys that make major sporting events such fun to attend.

But we should not be blind to the fact that Covid restrictions are hitting athletes from poorer countries hardest. In Papua New Guinea, for instance, there is only one high-performance training facility – which is currently a coronavirus isolation centre. It has meant that Dika Toua, a national hero who is hoping to become the first female weightlifter to compete at five Olympics, has had to train in a makeshift shipping container with no roof, during her country’s rainy season.

The situation is even worse for the country’s best shooter Danny Wanma. He has been unable to get access to ammunition and so, for the best part of a year, he has been “dry firing” — practising the motions without actually shooting.

Meanwhile when it comes to grassroots activity in Britain, the situation is also bleak. We all know the benefits of exercise and activity for people’s physical and mental health. Yet during the first lockdown, an Active Lives survey found that nearly 14 million people in England did less than 30 minutes’ exercise a week, a measure that includes everything from brisk walking to high intensity interval training. Worse still, that was a rise of three million compared with the same period a year before.

That survey also found that the pandemic had disproportionately affected certain marginalised parts of society, in particular Black Asian and minority ethnic groups and lower socio-economic groups. With much of the country back in tier 4, the figures for this winter are likely to be even worse.

Last week, the Save Our Sports campaign warned that much of the sport and activity sector – which employs nearly 600,000 people in the UK and contributes £16bn to the economy annually – was struggling. According to the Sport and Recreation Alliance and ukactive, there are thousands of swimming pools, leisure centres and gyms who fear they will not survive a prolonged period in tier 4 without government help.

Of course the great unknown here is how quickly people can be vaccinated – although it hardly inspires confidence when the government repeatedly over-promises and under-delivers. The health secretary Matt Hancock has claimed life could get back to normal after Easter. But that would require around two million vaccines a week, while at present about 300,000 are being provided.

A final point. Just before Christmas, the government gave UK Sport £352m to help British athletes prepare for the 2024 Paris Olympics. You can understand why. UK Sport has been a rare success story, and politicians love basking in the reflective glow that comes when a nation wins medals.

Yet even Olympians have to start somewhere, whether it is in poorly-lit pools or dingy sports halls. In October the UK government provided £100m to help publicly owned leisure facilities – many of which are in the poorest parts of the country – stay afloat. The fear is with national debt rising, and greater priorities elsewhere, it will not dip into its pockets again to help those most reliant on community provision – and thus will fail to reap significant social, physical and mental health return on investment that often flows from it. - Guardian