England player shown to have contracted virus during testing on arrival 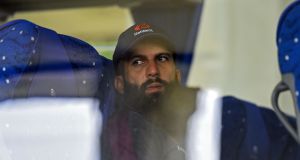 England’s Moeen Ali sits inside a bus upon his arrival at the Rajapaksa international airport in Mattala as England’s cricket team returned to Sri Lanka to play two Tests abandoned in March due to the Covid-19 coronavirus pandemic. Photo: Ishara S. Kodikara/AFP via Getty Images

England’s plans for their two-Test series in Sri Lanka have been rocked by the news that Moeen Ali has tested positive for Covid-19 and must now isolate for 10 days.

Moeen, who has returned to the Test squad after a year-long absence but was central to the 3-0 win in Sri Lanka in 2018, was shown to have contracted the virus during testing that took place when the squad arrived at Hambantota airport on Sunday.

In a statement issued by the England and Wales Cricket Board on Monday, 10 days away from the start of the first Test in Galle, it was also confirmed that Chris Woakes has been deemed a close contact and must also isolate for seven days before further tests that would allow his release.

It read: “Following PCR tests administered on arrival at the airport in Hambantota on Sunday January 3rd, The England and Wales Cricket Board can confirm that Moeen Ali has tested positive for Covid-19.

“The touring party will be PCR tested for a second time on Tuesday morning. At this stage, the team will train for the first time on Wednesday.”

Moeen will be able to leave isolation on January 13th but with no training possible until then, it effectively rules him out of the first Test that begins the following day. The 33-year-old is now due to travel to Galle early and stay in separate accommodation to the intended team hotel.

The entire England squad has been isolating in their rooms since their arrival on Sunday and will undergo further testing on Tuesday. If the results are all clear, they will be permitted to leave their rooms that afternoon, with their first training session now pushed back to Wednesday.

After undergoing testing last week, the players travelled to Hambantota from the UK on a charter flight but, according to a spokesperson, were physically distancing on the plane. Woakes has been viewed as a close contact having travelled to Heathrow airport in the same car as Moeen. – Guardian