Australian Open could be delayed due to bushfire haze in Melbourne

Organisers optimistic tournament will go ahead despite air quality being downgraded 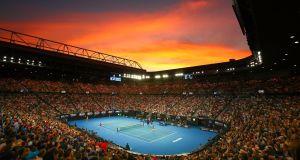 The start of the Australian Open could be delayed, but organisers are confident the tournament will go ahead. Photograph: Scott Barbour/Getty

Less than a fortnight before the start of the Australian Open, Melbourne lies under a thickening blanket of bushfire haze, and air quality has been downgraded to “very poor” and “hazardous”, which constitutes a serious health threat. There is a chance the tournament will be delayed, although conditions are expected to ease before the start on January 20th.

Smoke drifting across from Tasmania has mixed with continued pollution from fires in rural Victoria, and the air quality index that put Canberra on 568 on Friday – way in front of known pollution black spots in Asia – broke through the 200 barrier in Melbourne on Monday evening, which places the Victorian capital in fourth place behind Delhi and Lahore, and in front of Shenyang.

Seven-time champion and Australian Open favourite Novak Djokovic – who suffered respiratory problems early in his career – said at the weekend in his capacity as president of the ATP players’ council that air pollution at the Melbourne site would have to be closely monitored, and did not rule out discussing a delay to the tournament if players’ health was going to be compromised.

On Monday, those concerns were given substance in statements from emergency services and the tournament organiser. “We know it’s a threat to life for some people,” Victoria’s chief health officer, Dr Brett Sutton, said.

The State’s Environmental Protection Agency chief environmental scientist, Dr Andrea Hinwood, said: “We’re not expecting [air classification of very poor to hazardous] to change until Wednesday. We might see some light relief tomorrow, but we might not.” She said overnight rain had, “done almost nothing” to alleviate conditions. “Drenching rain would be terrific because it would knock it out. But the current amount is insufficient and there’s too much smoke.”

Craig Tiley, the chief executive officer of Tennis Australia, is optimistic the tournament will go ahead, but said air quality will be closely monitored.

“We have committed substantial extra resources to analysis, monitoring and logistics to ensure the health and safety of all players, staff and fans throughout the summer and have no other plans to move events [having cancelled a Challenger in Canberra],” Tiley said.

“Assessing the likelihood of smoke-induced interruptions is a bit like how we treat heat and rain. We have experts who analyse all available live data as specific to our sites as possible and consult regularly with tournament officials and, in the case of heat and smoke, medical experts.

“We have access to real-time monitoring of air quality at all of our venues and are working closely with medical personnel and local experts onsite to ensure we have the best possible information available to make any decisions regarding whether play should be halted at any point.

“The health of players, fans and staff is a priority at all times and we will continue to make these decisions with that in mind. The smoke has proven intermittently problematic in some areas. The worst affected so far has been in Canberra and after consultation with medical, air and weather experts we made a decision to move our event to Bendigo.”

Dr Sutton said pregnant women, asthmatics, diabetics and people with heart and lung diseases, as well as children under 14 and adults over 65, could experience coughing and irritation of the nose, throat and eyes. “If they need to be outside, they should wear [hardware store issue] P2 or N25 masks,” he said.

But he warned wearing masks “doesn’t mean it’s OK to go outside. They have to be fitted properly and when they are fitted it can make it difficult to breathe. Surgical masks and bandanas are not going to do the job.”

Meanwhile, plans for an Australian Open Rally For Relief, five days before the tournament are scheduled to go ahead, featuring some of the game’s leading players.

“We are in the grip of a national disaster that is causing pain and suffering to so many local communities and wildlife it is heartbreaking,” Tiley said. “For some time now we have been making plans for a tennis effort to help those in affected areas cope and ultimately help families and communities recover. Tennis is at the heart of the Australian way of life in our cities, suburbs and country towns. We feel an obligation to do whatever we can.

“The Australian Open will host an AO Rally for Relief on Wednesday, 15 January in Rod Laver Arena with a group of the best players in the world. We will also be holding an AO Music for Relief concert on Sunday 19 January.

“Throughout the summer we will be promoting Aces for Bushfire Relief (#Aces4BushfireRelief) and are looking to join forces with our partners, other tennis events and interested parties to surpass a target of $100 for every ace served during the summer.

“The support of the tours, players, our partners, our clubs and other tennis bodies around the globe has been overwhelming. We aim to turn that into millions of dollars of aid for the affected communities and are also putting another $1m toward rebuilding tennis infrastructure.

“The inordinate loss of people, wildlife, stock, homes, schools and businesses is going to require an extraordinarily widespread effort to get these families and communities back on their feet. Our aim is for tennis to play a significant role where we can to help that recovery. It is in this context that our team is also trying to focus on running our events throughout the summer.

“The players, the tennis-loving fans and our staff have been incredibly supportive. There has been an outpouring of support and an understanding of the challenges involved in the current situation.” - Guardian