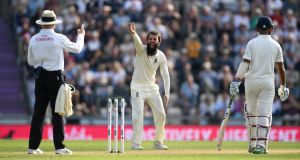 England’s Moeen Ali successfully appeals for the wicket of Ishant Sharma during day two of the fourth Test against India at The Ageas Bowl in Southampton. Photograph: Gareth Copley/Getty Images

Moeen Ali was once again a thorn in India’s side as he vindicated his England recall with five wickets on day two of the fourth Test at the Ageas Bowl.

The all-rounder was central to England’s triumph in the corresponding series four years ago but a dreadful winter had seen him omitted from the Test ranks this summer, with Adil Rashid preferred as the number one spinner against India.

Not for the first time, though, Moeen seemed to revel in his status as the back-up slow bowler and he marked his return with figures of five for 63 as India were all out for 273 and a slender 27-run advantage.

The tourists, trailing 2-1 in the Specsavers series, were indebted to Cheteshwar Pujara’s 132 not out – incredibly only his second century away from Asia and his first in England – which was the backbone of the innings.

The day also saw Virat Kohli become the second fastest Indian batsman to reach 6,000 Test runs, and it seemed he and Pujara would put India in a commanding position when they reached 142 for two in mid-afternoon.

But the usually irrepressible Kohli fell four runs short of a half-century after edging the ever-willing Sam Curran to Alastair Cook at first slip before Moeen took star billing.

Moeen, who claimed 19 wickets at an average of 23 in the series between these teams in 2014, had his first when Rishabh Pant was trapped in front to end a tortured 29-ball stay in which he failed to get off the mark. After tea, Hardik Pandya flicked straight to midwicket, Ravi Ashwin and Mohammed Shami were bowled off successive deliveries before Ishant Sharma was snaffled at the second attempt by Alastair Cook at short-leg.

Pujara, at this stage, was in danger of being left stranded in the 90s but last-man Jasprit Bumrah provided admirable support, allowing the senior batsman to complete a resolute century from 210 balls.

A 46-run last-wicket stand took India into the lead and frustrated England, but Stuart Broad – who had earlier removed openers KL Rahul and Shikhar Dhawan — had the battling Bumrah caught at first slip.