Pereyra and Holebas deliver historic win for Watford over Palace 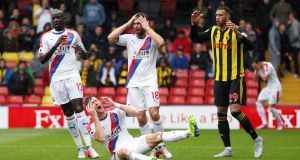 Watford’s pristine start to the new season has been maintained, with this a victory to be cherished in this corner of Hertfordshire.

Their collisions with Crystal Palace have tended to be feisty over recent years, and rarely won on home territory, so there was delight to be had in claiming a third successive win at the start of a top-flight season for the first time in their history at the expense of these opponents.

Even now those pessimistic preseason noises about a campaign of toil lying ahead feel deceptive. Once Watford found their rhythm here, and it did take them time, there was a fine blend of attacking zest and aggression to their game which, at the very least, should keep them well clear of trouble for another season.

Javi Gracia’s Watford made life difficult for themselves when Wilfried Zaha, a pantomime villain in these parts, somehow escaped an assistant’s offside flag from Max Meyer’s pass and fizzed a shot through Ben Foster to halve Palace’s deficit.

But the visitors could not follow up with an equaliser, Joel Ward planting a free header wide in stoppage time, and ended up paying for missing fine opportunities earlier in the game.

Zaha, departing to catcalls, will have taken no pleasure from his consolation. This had been a snarl of a game from the outset between opponents whose rivalry has been stoked by regular recent meetings.

The tone had been set by Étienne Capoue’s raking of Zaha’s right ankle early on, the midfielder’s little jump into the foul giving it an ugly feel, with the hosts intent upon playing on the Ivorian’s apparently suspect temperament.

He had been booked on his previous three visits to this arena and, riled by that early treatment, would endure the same indignity within the opening 10 minutes for a foul on José Holebas. That Daryl Janmaat escaped sanction for a similar follow-through on Patrick van Aanholt seconds later merely fuelled the suspicion of inconsistency.

Zaha’s every touch would provoke a familiar chorus of boos from the home support though, in truth, other Palace players were unnerving the hosts. The visitors would repel a flurry of late chances just before half-time as Watford roused themselves but, by then, should have established a lead of their own with the locals thankful for Foster’s excellence.

The goalkeeper, back here for a second spell having enjoyed two seasons on loan over a decade ago, reacted superbly to push away Christian Benteke’s header from Andros Townsend’s cross with an outstretched right hand.

When James McArthur collected from the winger’s centre and took a touch around Craig Cathcart moments later, there was Foster again to deny the midfielder from point-blank range.

Roy Hodgson, bedraggled on the sidelines, could barely comprehend quite how it had been missed though, as it transpired, those would prove his team’s most inviting chances of the afternoon.

The Palace manager had lost James Tomkins to a calf injury in the warm-up, with the absence of the influential centre-half potentially critical given the success he has enjoyed alongside Mamadou Sakho of late.

Last week’s defeat against Liverpool was a first in 14 top-flight games in which the pair have started. Yet, other than a shot from Roberto Pereyra deflected over the bar by McArthur, the home side’s threat had been fitful up to the interval.

There was more urgency to their approach after the break, with Will Hughes thumping a shot into Wayne Hennessey’s midriff when free at the far post and Palace suddenly labouring in the drizzle.

Pereyra, found calmly by Abdoulaye Doucouré’s pass, would blaze over the bar but, eventually, the Argentinian would find his range.

His third goal of the campaign to date stemmed from Zaha surrendering possession deep in enemy territory and Capoue surging forward, holding off weak attempts at a challenge from McArthur and Luka Milivojevic en route. He spread the ball wide to Pereyra who cut inside Ward and Townsend before curling a delicious shot beyond the diving Hennessey and into the far corner.

The visitors stirred briefly, Benteke spinning to rasp a shot marginally wide of Foster’s upright, but passes tend to be overhit in the final third when composure was required.

Indeed, the momentum was with the hosts. The game had entered its last quarter when Holebas, cutting inside Townsend, lofted over a shot which arced gloriously over Hennessey and Van Aanholt, retreating on to the goalline, to nestle in the far corner. Zaha’s riposte made life uncomfortable in what time remained, but Watford held out to enjoy life joint top of the table