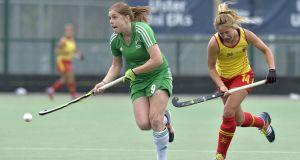 Ireland captain Katie Mullan in action against Spain. She will play this season in Germany with reigning champions Club an der Alster. Photograph: Rowland White/Inpho/Presseye

While the domestic league is still almost a month away, five of Ireland’s World Cup silver medalists start their new club seasons this weekend – much earlier than usual.

The top four clubs in Germany all include an Irish player with Katie Mullan confirming this week she will join reigning champions Club an der Alster.

The Green Army captain will start competitive life with Alster with an away derby date against UHC Hamburg, a repeat of last year’s grand final, with Nikki Evans in the opposing line-up.

For Mullan, it ends a lengthy spell at UCD where she ended up with a masters in biomedical engineering and so is the perfect time for her to make the move.

Post World Cup, she does recognise the double-edged sword for Irish hockey with a number of top stars leaving the national league to pursue pro contracts. Such moves have undoubtedly paid dividends for those who have taken a year or two away but the current players’ profile has never been higher. Without their visibility, it could limit potential growth locally.

But, particularly for Mullan, there can scarcely be a better time to take on a professional contract with her studies just behind her and Tokyo 2020 qualification coming quickly into view.

Looking forward to the challenge, she said: “The Germans play a slightly different style that will be great for me to experience; they have excellent technical skills which are currently a big focus of mine.

“It is a great opportunity for me to play alongside and hopefully learn from some world class players! I want to enjoy the life experience too and sure I have nothing to lose.”

At Alster, she joins a group that won the national title for the first time last season and includes a series of top German stars as well as Olympic gold medalist Susannah Townsend.

Elsewhere in the league, Megan Frazer has returned to Mannheimer HC while Deirdre Duke makes her debut for Dusseldorfer HC.

In the Netherlands, Anna O’Flanagan has joined newly-promoted Pinoke from Bloemendaal while, in Belgium, reserve goalkeeper Emma Buckley is keen to use her move to Racing Club de Bruxelles to boost her chances of becoming a more central figure.

Lena Tice is another player overseas, taking in the New Zealand Hockey League but that will finish in late September, allowing her to form part of UCD’s line-up. It is a similar story on the men’s side this weekend with eight current Irish panelists lining out for Belgian clubs.