Chelsea maintain winning start thanks to late own goal 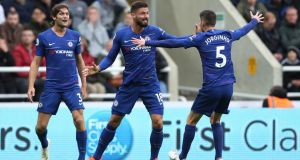 The temperature felt far too low for Italy in August and the rain had a drearily English persistence about it but for, long periods, Maurizio Sarri must have felt convinced he was somehow back in Serie A.

Rafael Benitez preceded Chelsea’s manager at Napoli and, clearly remembering that schooling in Catenaccio, very nearly succeeded in choreographing his Newcastle United side to a tactically astute draw against possession monopolising visitors.

Instead DeAndre Yedlin’s late own goal dictated that Sarri’s side boarded their flight back to London, with three wins from three Premier League games and standing second in the embryo table, behind Liverpool on goal difference.

Five at the back may be an anathema to Sarri’s football philosophy - otherwise known as Sarri Ball - but Benitez deployed three centre halves as part of a radical re-structure of his team here.

With the captain Jamaal Lascelles and the playmaker Jonjo Shelvey not even on the bench, this home starting X1 featured debuts for Salomon Rondon, Fabian Schar, Ki Sung-yueng and Federico Fernandez.

Shortly before kick off Benitez was forced to deny reports of a training ground row with Lascelles, reportedly over his refusal to offer his skipper the sweeper role, and indicated that Shelvey was injured.

With Chelsea rebutting a Sunday Times report that Roman Abramovich is hoping to sell the club, it was turning into something of a day of denials. What was slightly puzzling is that, although Lascelles has been carrying a minor injury Newcastle’s manager had repeatedly said he didn’t feel Switzerland’s Schar was quite ready for his Premier League debut.

Instead the former Deportivo stopper’s unexpected bow arrived on a cool, breezy, very rainy, Tyneside afternoon with the conditions sufficiently unpleasant to force Benitez into the rare step of suppressing his inner Geordie and wearing a coat in the technical area.

In ignoring the rain in a worryingly lightweight tracksuit and flimsy baseball cap, Sarri had gone for more of a Tony Pulis look but the rather manic manner in which Chelsea’s manager chewed gum suggested that the Italian may take time to adjust to English grounds’ status as no-smoking zones.

Sarri Ball is all about intense pressing and a high defensive line but with a Newcastle side captained by Paul Dummett closing Chelsea down assiduously, this visiting system was unable to operate at anywhere near like maximum power.

It did not help that Eden Hazard, making his first club appearance of the season following the World Cup, was swiftly left limping after being caught, probably accidentally, by the studs of first Matt Ritchie and, shortly afterwards Mo Diame.

Hazard recovered sufficiently to direct a low shot just wide of a post in a first half low on decent chances. Sarri acknowledges his tactics carry “risk” but Newcastle’s cautious 5-4-1 system often left them looking far too timid to get behind that high line.

On the two early occasions when Chelsea’s defence was breached, Jacob Murphy - deputising for the Stamford Bridge loanee winger Kenedy - dispatched a cross into the arms of Kepa Arrizabalaga and then shot straight at the keeper when it would surely have been better to pass to the better placed Dummett.

With the home priority clearly being stopping Chelsea, it would be an understatement to say that Sarri’s players dominated possession. Yet although the Londoners had the ball for almost 80 per cent of the opening 45 minutes they were not permitted sufficient room for manoeuvre to do too much of note with it.

Admittedly, Jorginho was often impressive at the heart of their 4-3-3 formation and Hazard recovered sufficiently to run through a wonderful repertoire of dexterous ball manipulation, defender-spinning swivels and delicate touches but Martin Dubravka was largely underemployed in goal.

Admittedly, Alvaro Morata saw a shot deflected wide following a lovely one-two with Hazard and Pedro curved a miscued half-chance off target after dispossessing Ki but, significantly the best opening of the first half fell counter-attacking Newcastle’s way.

It came from a set piece and involved Ritchie’s corner being half cleared before being curled back into the box by Fernandez. Rondon made a decent connection before dispatching a header wide when the West Brom loanee centre forward really should have scored.

Had former Newcastle managers Sam Allardyce and Alan Pardew presided over such apparently negative home tactics they would have doubtless been pilloried by Gallowgate Enders but Benitez can do no wrong - locals are convinced he is capable of walking on the Tyne - and, in truth, the coach who led Chelsea to Europa League triumph surely had his strategy spot on.

While permitting Hazard and friends to strut their stuff made have made for a more entertaining spectacle, it would surely not have done too much for a Newcastle goal difference which, come the end of the season, could potentially prove the margin between survival and relegation. Moreover, Benitez’ players menaced from set pieces.

With Fernandez, recruited from Swansea, shining in Benitez’ back three, even Hazard could not quite blow the black and white house down and although Dubravka was finally called to arms, Cesar Azpilicueta’s shot prefaced a routine save.

Sarri replaced the ineffective Morata and Pedro with Olivier Giroud and Willian and his side briefly raised the tempo. Antonio Rudiger hit the bar with a ferocious 30 yard shot before Schar sent Marcos Alonso crashing in the area and, somewhat contentiously, Chelsea were awarded a penalty. Dubravka guessed right but Hazard’s kick was far too good and, finally, Sarri smiled.

It did not last. When DeAndre Yedlin swept past Giroud, inexplicably filling in at left-back, the substitute striker claimed the right-back had elbowed him in the face but the referee ignored him permitting Yedlin to cross superbly for Joselu - on for Rondon - to head an imperious equaliser.

Giroud scowled. Or at least until Willian’s free kick was only semi-cleared and Alonso’s volley was diverted into Dubravka’s net by Yedlin.