McFarland laughs off idea of feeling sorry for Cullen; Spurs within 90 minutes of ending drought 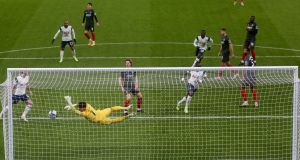 Another weekend of Pro14 interpro action beckons and Ulster can certainly look forward to their trip to Dublin with a pep in their step as they look to get one over on a weakened Leinster side. Yesterday Dan McFarland rejected the idea that their opponents were vulnerable and struggled to hold in his laughter when it was suggested to him that he many feel sorry for Leo Cullen who will watch a number of former Leinster players line out in Ulster white. “Do I feel sorry for Leo? Are you joking! He is sat in amongst 10 or 12 of the wealthiest schools in the country, plying people from rich families through those schools and churning out bursaries to the best prospects. Do I feel sorry for him? That’s hilarious,” McFarland said. Elsewhere, Connacht will meet Munster as they look to maintain their hopes of reaching the Pro14 final after coming off a historic win over Leinster last week. However, with the system tweaked and only the Conference-toppers going through to the final, this is very much a must-win game for Andy Friend’s team as they look to get the better of both Leinster and Munster in the space of a week.

In soccer, Tottenham are 90 minutes from ending a 12 year trophy drought after goals from Moussa Sissoko and Son Heung-min saw them past Brentford and into the Carabao Cup final. Victory would mean Mourinho surpasses Alex Ferguson’s and Brian Clough’s record of winning this competition on four occasions, having done so with Chelsea in 2005, 2007 and 2015, and with Manchester United in 2017 and the Portuguese is confident his side can do it against either United or Manchester City who meet in the other semi-final tonight (7.45pm kick-off, Sky Sports Main Event and Sky Sports Premier League). Ahead of that derby, Ole Gunnar Solskjaer has shrugged off claims from Jürgen Klopp and Mourinho that United earn significantly more penalties than their rivals with Sunday’s spot-kick against Aston Villa being the 42nd of the Norweigan’s tenure since he took over in 2018. Ahead of the match tonight there will be a minute’s silence for former City player Colin Bell who died yesterday at the age of 74 after a stellar career which saw him score 152 times for City. Finally, in some Irish news, Jayson Molumby will look to get some more first-team action after he made the switch last night from Brighton to Preston North End on loan.

6 Kremlin accuses US of backing anti-Putin rallies across Russia

11 More than half in North want vote on a united Ireland, poll finds

12 Emma de Souza: My generation deserves to have its say on Irish unity now

20 Sweden to close border with Norway after Oslo locks down

27 Badge of distinction: Meet the first Sikh in the Garda Reserves

28 Oscar Wilde, my grandfather, ‘talked himself into prison’

34 A Kerala Kitchen curry for the weekend

35 Conor McGregor stopped by Dustin Poirier in second round

36 My first year as a TD: ‘I felt like I was working in a blizzard’

37 Teaching was Jerry Kiernan’s vocation; in 30 years he never missed a day

38 Chris Johns: If this is to be the last lockdown it must work

39 Five habits learned during the pandemic that we should keep