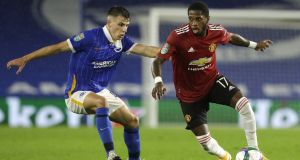 Republic of Ireland midfielder Jayson Molumby has joined Championship side Preston North End until the end of the season.

The 21-year-old had been anxious for the opportunity to play more first-team football but the nature of the move underlines the fact that Brighton still see him as having a long-term future of the club with a move by Millwall to bring him back to south London on a permanent basis rejected.

Despite having made a big breakthrough at senior international level in the autumn, Molumby had featured only three times for Brighton since the start of the season, the most recent occasion being a very brief appearance in a league game towards the end of November.

More recently, he had started to become something of a regular on the bench but without seeing any action. Manager Graham Potter seemed sympathetic to the player’s plight last week, acknowledging how difficult it is for someone his age to break into a top-flight starting line-up but Molumby’s prospects were about to be made worse by the return of Polish international Jakub Moder, an €11 million buy last summer, from a loan spell at Lech Poznan this month.

Millwall, where he made 40 appearances over the course of a highly successful loan spell last season, sought to get him back, offering to pay what would, it was reported locally, have been a club record fee for the Irishman. Brighton, though, preferred simply to have him add to his experience and Preston are said to have beaten off competition from other clubs to get him.

“I am really happy to be here,” he said on Tuesday. “Seani [Maguire] and Alan [Browne] speak very highly of the club and then the gaffer spoke to me and was the same. In the end, I just wanted to get it done and I am really excited to get going and I just want to play some games and help the team.”

Preston boss Alex Neil said he was delighted to get the player. “I think this is a signal of intent from us and he is a great acquisition. He has great energy, is good on the ball and has played at this level before.”

Swansea, meanwhile, have pulled out of a loan deal for Michael Obafemi after the Southampton striker sustained what is described as “a significant muscle injury,” while training at the weekend