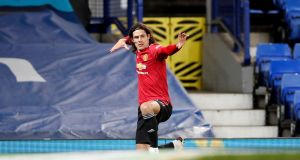 Edinson Cavani of Manchester United has been banned for three matches for his social media post. Photo: Clive Brunskill/Getty Images

The Uruguayan players’ union has called on the Football Association to overturn Edinson Cavani’s three-game ban for using the word “negrito”.

The Manchester United forward used the term in an Instagram story after scoring twice in a 3-2 victory at Southampton in late November. The 33-year-old received a three-match ban, missing United’s victory over Aston Villa on Friday, and said his “heart is at peace” because there was no racist intent behind his use of the word.

But in a statement posted on social media on Monday, the Uruguayan players’ union described the FA’s decision as “a true discriminatory act, which is completely reprehensible and against Uruguayan culture”.

The statement, which has been widely shared by several high-profile players, including Atlético Madrid’s Luis Suárez, read: “Firstly, we must condemn the arbitrary conduct of the English Football Association. Far from condemning racism, the English Football Association has itself committed a discriminatory act against the culture and way of life of the Uruguayan people.

“The sanction shows the English Football Association’s biased, dogmatic and ethnocentric vision that only allows a subjective interpretation to be made from its particular and excluding conclusion, however flawed it may be.

“Edinson Cavani has never committed any conduct that could be interpreted as racist. He merely used a common expression in Latin America to affectionately address a loved one or close friend. To sustain that the only way to obtain a valid interpretation in life is that which lies in the minds of the managers of the English Football Association is actually a true discriminatory act, which is completely reprehensible and against Uruguayan culture.”

The statement went on to demand Cavani’s ban is overturned so he can “reinstate his good name and honour in the world that has been so unfairly tarnished by this reprehensible decision”.

The former Paris Saint-Germain striker was also fined £100,000 by the FA and must complete a two-hour face-to-face online education course. Cavani, having pleaded guilty to a charge of using insulting and/or improper words, said he accepted the sanction but did not share the FA’s assessment of his message.

According to United he decided not to contest the case “out of respect for the FA and the fight against racism in football”. – Guardian