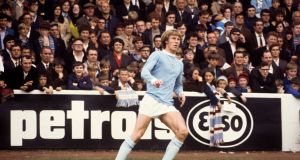 Former Manchester City and England midfielder Colin Bell has died at the age of 74, the club have announced.

Bell made 492 appearances and scored 152 goals for City during his 13-year stay after joining from Bury in 1966.

He helped City secure promotion to the top flight that year and was one of their stand-out players as they edged out Manchester United to win the First Division title in 1968.

FA Cup success followed in 1969 as well as two more trophies in 1970 – the League Cup and the European Cup Winners’ Cup. Bell was the club’s top scorer three times.

A club statement read: “Colin passed away peacefully this afternoon after a short, non-Covid related illness, aged 74. He leaves behind wife Marie, children Jon and Dawn and grandchildren, Luke, Mark, Isla and Jack.”

Bell earned the nickname ‘The King of the Kippax’ after one of the terraces at their former Maine Road home, and has a stand named after him at the Etihad Stadium after a fans vote.

Mike Summerbee, a former City team-mate of Bell and now a club ambassador, told their official website: “Colin was a lovely, humble man. He was a huge star for Manchester City but you would never have known it.

“He was just the greatest footballer we have ever had. Kevin De Bruyne reminds me a lot of Colin in the way he plays and the way he is as a person.

“Even though I knew he’d been poorly for a while; I wasn’t expecting to lose him – it’s a complete shock.”

Tony Book, who captained that City team in the late 1960s and early 1970s, added: “He was a very special person, not only as a footballer but as a man – I can’t believe he’s gone.

“He is irreplaceable. We had some great times together and I’ll miss him terribly.”

Former City team-mate Rodney Marsh wrote on Twitter that Bell was the “most underappreciated footballer who ever played” and “the professional I always wanted to be”.

Francis Lee told the club website: “He goes into the top five City players of all time – only in the last 10, 15 years has anyone else come along who can take that mantle.”

City’s rivals Manchester United also paid tribute, writing on Twitter: “All of us at ManUtd are deeply saddened by the passing of Colin Bell, a true footballing legend. Condolences to Colin’s loved ones and everyone at ManCity.”

Former England striker Gary Lineker added: “Saddened to hear that Colin Bell has passed away. One of my favourite players when I was growing up. Terrific box to box midfielder. A real gem for Man City and England.”

Ex-City striker Shaun Goater wrote: “My deepest condolences to the Bell family. There will only ever be one King Colin Bell. RIP”