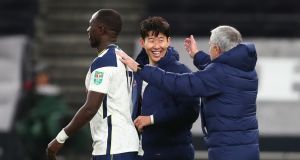 José Mourinho believes Tottenham’s players have shown their desire to end the club’s trophy drought after booking their place in the Carabao Cup final with a 2-0 win against Brentford.

An early header from Moussa Sissoko put Spurs on course to reach Wembley for the first time since 2015 before Ivan Toney’s goal was disallowed for a marginal offside in the second half. Son Heung-min’s 16th of the season sealed Tottenham’s victory and in the April final they will meet the winners of Wednesday’s showdown between Manchester United and Manchester City.

Victory would mean Mourinho surpasses Alex Ferguson’s and Brian Clough’s record of winning this competition on four occasions, having done so with Chelsea in 2005, 2007 and 2015, and with Manchester United in 2017. But while Spurs have not won a trophy since Juande Ramos led them to extra-time victory against Chelsea in the 2008 League Cup, their current manager is hopeful that could be about to change.

“I came to England in 2004 and I remember in that period I had to learn the meaning of the cups here,” Mourinho said. “I always took it seriously. If there is any secret it is to take it seriously.

“What I sense in the team is exactly that desire. I’m not saying [A]winning mentality – I’m not saying that we are this or that. I just say that we are honest people and since the first game at Chelsea and the second at Stoke, the guys took it seriously. That’s what I hope to do again on Sunday in Crosby against Marine.”

Mourinho said he expects Pierre-Emile Højbjerg to be fit to face the non-league side in the FA Cup third round despite being substituted late on with a gashed shin after a challenge from Brentford’s Josh Dasilva. The former Arsenal youth-team player was shown a straight red card after VAR reviewed the incident but Mourinho revealed Højbjerg did not want to be replaced by Japhet Tanganga.

“It was for sure a bad tackle because he is bleeding a lot and the shinpad is a bit broken. But that’s football. The kid Dasilva is a young guy and is a good player. In the heat of the game there is nothing to be critical of. Pierre has a big cut but he didn’t even want me to play Tanganga in the last five minutes so I believe he can be okay for the weekend.” – Guardian