Spurs are on their way to Wembley, Jose’s gone and done it again 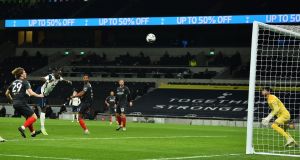 Son Heung-min had no time for the romance of the Brentford story. The Championship club had never played a major semi-final in their 132-year history but they thought they had the springboard to victory midway through the second half.

Ivan Toney had headed home from point-blank range for what he thought was a goal to cancel out Moussa Sissoko’s 12th-minute header. Brentford seemingly had a jolt of momentum. And then they did not.

Most people had forgotten VAR was in use for this Carabao Cup semi-final. It had not previously featured in the competition. But up it cranked to spot Toney was marginally in front of the last Tottenham defender. It was a body blow to Brentford and Son was quick to twist the knife.

It was a typically slicing run by the Spurs attacker on to a Tanguy Ndombele pass and, when he shrugged off Henrik Dalsgaard’s challenge, everybody knew what would happen next. The finish was cool and precise, Brentford were crushed, heading towards a first defeat in 17 games and Spurs could start to look forward to a final against one of the Manchester clubs on April 25th.

There was a late red card for Brentford’s Josh Dasilva, also following a VAR intervention. His stamping tackle left Pierre-Emile Højbjerg nursing a long cut down his shin – but the midfielder and Spurs will not mind the battle scars.

After what José Mourinho had labelled as his biggest game at the club, his team are within touching distance of ending a 13-year trophy drought.

Spurs had won only two ties to get this far whereas Brentford, who had started in round one of the southern section back on September6th, had won five. Spurs were granted a bye against Leyton Orient in the fourth round. Brentford had taken four scalps from the league in which they aspire to play – Southampton, West Brom, Fulham and Newcastle – and it meant there was precisely zero danger of Mourinho underestimating them.

He sent out what felt like his strongest available line-up – apart from Davinson Sánchez for Toby Alderweireld and maybe Lucas Moura for Steven Bergwijn – and there was a recall for Sergio Reguilón after his well-documented Covid protocol breach.

Reguilón helped to put Spurs in control in the early running. It was frustrating for Thomas Frank to see that Bryan Mbeuno was slow to get across to Reguilón but take nothing away from how the full back flighted over the centre from the left. It caught out Ethan Pinnock and Sissoko, lurking behind him, had the time to allow the ball to come across him before guiding a header into the far top corner.

Reguilón’s Spurs debut had come in this competition against Chelsea at the end of September on a night when he looked off the pace. He is up to speed now and he was eager to hurt Brentford with his thrusting runs.

The visitors moved the ball about with the confidence of a team on such a long unbeaten run but could they hurt Spurs? Mourinho has his defenders well drilled and there was an assurance about their one-on-one work during a first half in which they were untroubled.

Mbeuno, who caught the eye with his quick feet, slung over a cross on 35 minutes but Sánchez was touch tight to Toney, Brentford’s summer signing from Peterborough, who has scored 16 Championship goals in 22 games this season. Sánchez stood his ground in muscular fashion and Toney, forced to stretch, headed well wide.

Spurs had two other good attacking moments in the first half, with Son left to rue how he did not convert the first. Harry Kane started the move and, when Lucas touched the ball off for Son, the scene was set for him to bend a trademark shot for the near corner. Instead his effort went straight at David Raya.

Lucas also sprang to meet a Son corner, with the ball looping towards the far corner off Toney, his marker. Raya reached back to make a superb one-handed save.

There was greater tempo and spice after half-time, although it still did not feel like a semi-final that Brentford had waited so long to contest. This is what happens when the only cries that can be heard are from the players. Brentford were slightly fortunate not to lose Sergi Canós to a second yellow card on 47 minutes for a foul on Lucas but then came a big chance for the equaliser.

It started with Mbeuno beating Sánchez on the byline and, when the centre half nibbled back at him, it felt as though Brentford would have had a penalty if he had gone down. Mbeuno wanted more. He crossed for Toney and it needed a saving block by Serge Aurier to deny him.

Aurier flashed high and Son volleyed off target but Brentford looked livelier and they thought they had their moment when Pinnock headed back a corner. Hugo Lloris could only touch the ball up and back and there was Toney to head home. Enter VAR. – Guardian