Investigation into FAI records could lead to prosecutions

If failure to keep proper accounting records proven, then potential sanctions can be serious

Minister for Sport Shane Ross has told an Oireachtas committee the entire FAI board intends to step down. Video: Oireachtas TV 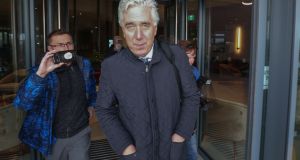 Investigations mainly revolve around circumstances in which a €100,000 loan was given by former FAI chief executive John Delaney to the football association in April 2017. Photograph: Colin Keegan/Collins

The Football Association of Ireland board could face criminal sanction if an investigation into claims of failure to keep proper records finds any wrongdoing.

The filing of the form, which is called a H4, is a rare event and the FAI notice is the first entered this year. Only four have been filed since the beginning of 2018.

If a failure to keep proper accounting records is proven, and there are contraventions of sections 281 to 285 of the Companies Act, then potential sanctions are serious.

A conviction could result in individual board members facing a fine of up to €50,000 or imprisonment for up to five years.

As the FAI crisis escalated yesterday, details of two investigations into governance and finances in the football association were disclosed to the Oireachtas committee on sport.

The investigations mainly revolve around circumstances in which a €100,000 loan was given by former chief executive John Delaney to the football association in April 2017. The FAI has confirmed its board would resign in July, or possibly sooner, in a letter to Minister for Sport Shane Ross. Mr Ross said he wanted it to happen sooner and also told the committee “we are now to see the beginning of the end of the old FAI”.

The committee was told Mr Delaney was still on the football association payroll but was now on “gardening leave” from his new post as executive vice-president.

Fine Gael TD Noel Rock highlighted the FAI’s failure to address the Sunday Times report regarding Mr Delaney’s expenses. He said it was “appropriate and fitting” to “enlist the ODCE and the other agencies that are showing an interest, such as Revenue and the Garda fraud squad . . . to get to the bottom of this”.

In the Dáil, Taoiseach Leo Varadkar said the Government “shares the concern of taxpayers, the anger of football fans and the annoyance of the football grassroots with the revelations of how the FAI has been run in recent years, if not for much longer”.

1 Ger Loughnane and the spark that lit Clare’s hurling revolution
2 TV View: Sky’s talk of piped-in atmosphere is ominous
3 The strangest fishing club in the US and the huge pike that bit a schoolboy
4 Connell losing touch with club championship is real tragedy of Normal People
5 Andrew Porter diary: Meat, veg and intermittent fasting the order of the day
Real news has value SUBSCRIBE