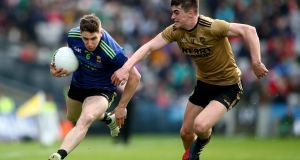 Mayo’s Lee Keegan in action against Kerry’s Seán O’Shea during the Allianz Football League final. “It was very satisfactory. If you’re in any competition, you try and win it. And it was great to win, in Croke Park.” Photograph: James Crombie/Inpho

“Definitely more scary,” is how Lee Keegan describes the first change in James Horan since his return as Mayo football manager. And he doesn’t stop there.

Because if Mayo are to win that elusive All-Ireland this summer, suggests Keegan, it won’t be by behaving or being treated like children. Or indeed by staying strictly on the dry.

The All-Ireland is an entirely different challenge, only that doesn’t mean Mayo didn’t enjoy winning the league; and there’s been no swearing off booze or signing of contracts in the meantime either.

“People have their contrasts, because of the way we celebrated but any time you win anything it should be celebrated,” says Keegan, the four-time All Star, at 29 now one of the more senior members of the team.

“It was one night, that was it. We were back training on the Tuesday. People probably made a lot of it.

James put a lot of pressure on us to perform, because no one’s getting picked if they’re not playing well

“And it was very satisfactory. If you’re in any competition, you try and win it. And it was great to win, in Croke Park. But I think at the same time, it’s only the league. We were back with the club the following Tuesday. It was very short-lived. I mean it was really back to business straight away.

“James put a lot of pressure on us to perform, because no one’s getting picked if they’re not playing well. The big thing with James is, he’s bringing the style where he doesn’t care what you’ve done before as a player and that’s keeping a lot of us on our toes and keeping us fresh.”

That’s the ruthless part, the maturity with which the way the team is treated just as important: “I think that’s something with James as well, he treats us like adults. I think this whole myth around ‘you’re nearly a 30-year-old lad, you can’t go drinking’, I think you have to debunk that, because if you can’t be treated like an adult then you’re not going to act like one in training.

“There’s no drink ban. You’re not signing contracts. If you want to be playing at the highest level it’s really at your discretion and it’ll show up if you’re not performing that you’re not doing your stuff outside of training.

“There’s not a drink ban as such, it’s just having the common knowledge when to do it and not to do it. If you’re three or four weeks out from championship, it’s not even a discussion, you know yourself at this stage.

“When you get a bit older you start to respect your body that bit more, it takes a bit longer to recover, and the way game has gone with the physicality of it, the fitness for my position anyway, you just want to look after yourself as best possible. I don’t want some young lad coming behind me taking my spot.

“And I think it’s just crazy, getting people to sign contracts. We’re adults, if you treat us like adults we will act like adults. If you start putting bans on lads that’s where you start losing respect and you won’t get the best from lads. Young lads are a bit different to the older lads, who know their bodies well. It’s very much individual, if lads want to have a few drinks; absolutely and if lads don’t that’s fair enough as well. There’s no red line really.”

Speaking in Croke Park to launch the 2019 John West National Féile, the sponsorship renewed for a further four years until 2022, Keegan also suggests that GAA players are sometimes treated more like children on the issue, at least compared to other elite sports.

There’s not a drink ban as such, it’s just having the common knowledge when to do it and not to do it.

“Yeah you sit in the pub even having a Mi-wadi and the heads are staring over at you, ‘why is he in here?’ If you can’t have a normal life like that, what’s the point? I think it’s just the culture within GAA.

“I always look at professional sports and particularly rugby; they have their few beers after their game and they train two days later and perform at the highest level the week after. That’s the way the way the GAA should look at it as well, it’s part and parcel of life.

“If you can’t enjoy life with a bit of success or even if you lose to have a few beers with your mates, that’s part of sport and you have to have that as well. There has to be a balance, if you are always locked into GAA, what is there out there for yourself?”

In the meantime there are club games to be played, and a Connacht championship to be won. Keegan is entirely focused on their opener against New York on May 5th, but can’t help noticing as well talk about certain players elsewhere. Like Diarmuid Connolly in Dublin?

“Yeah, I hear he’s playing centre back! And you see Rory O’Carroll back playing at the weekend, so they are big plusses for Dublin. They are definitely two players that would be serious contenders for any team, so to have them back playing is a huge plus. But I can’t be worrying about those guys. They are for Dublin to worry about. We’ll worry about our own players back home.”