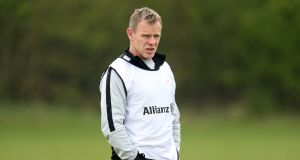 Saracens director of rugby Mark McCall said must Billy Vunipola deal with whatever reaction he gets from the crowd. Photograph: David Rogers/Getty Images

McCall confirmed Vunipola will start Saturday’s Champions Cup semi-final against Munster at the Ricoh Arena, then said the number eight must handle whatever flak comes his way. The 41-cap backrower has been warned by both club and country after a social media post last week that read “man was made for woman to procreate that was the goal no?”

The England star had liked a social media post from Australia’s Israel Folau, that stated “hell awaits” for “homosexuals”, and was subsequently booed by supporters during Saracens’ 23-21 Premiership defeat at Bristol on Saturday. Asked if he hopes fans will not boo Vunipola again, McCall said: “That’s not something we can control to be honest. Whatever happens will happen.

Wallabies fullback Folau’s career is in tatters after he was sacked by the Australian Rugby Union (ARU) for his controversial Instagram post. The devout Christian has pledged to accept his fate, while England star Vunipola has been warned about his future conduct after liking Folau’s post.

Asked if McCall was concerned for Vunipola’s mental state, McCall continued: “No. Billy’s sensitive, but I think he’s also strong. He’s also got a group he’s been with for a long time now, and a group who support their team-mates.

“They get behind each other from a rugby point of view, and that’s what we’ll do for this weekend.” Escaping a fine or a ban leaves Vunipola available for England’s four warm-up Tests ahead of autumn’s World Cup. The RFU statement read: “Following a meeting between the RFU and Billy Vunipola, the Saracens forward has been issued with a formal warning under RFU rule 5.12 for conduct prejudicial to the interests of the union or the game.

“The warning will be retained on his disciplinary record for a period of five years and may be taken into account in future disciplinary proceedings. During the meeting the player expressed genuine regret at his public comments and understood that he had caused hurt and offence as a result of his actions. “He has been reminded of his responsibilities as an England player and as an ambassador for the game, which values inclusivity and respect.”

Saracens also issued Vunipola a formal warning after their own investigation, admitting the England star was guilty of a “serious error of judgment”. Vunipola himself insisted his “intention was never to cause suffering”, though stopped short of offering an apology. The response from club and country has been welcomed by Stonewall, the LGBT equality charity, and by International Gay Rugby, the umbrella organisation for the world’s gay and inclusive rugby clubs. Channel 4 has dropped the Australian-born forward of Tongan heritage as one of the faces of their Heineken Champions Cup coverage while Saracens’ main sponsor Allianz said on Tuesday that they support the club in issuing the warning. Condemnation has also come from the Rugby Players’ Association and Premiership Rugby. Stonewall, meanwhile, praised the speed of the response to a post that appeared on Friday.

“We know there is still lots of work to do to combat discrimination and anti-LGBT abuse in sport and it’s great to see clubs and sporting bodies taking steps to make sure sport is a place where everyone feels like they can participate.”

IGR echoed Stonewall’s view that the matter had been properly dealt with. “IGR is pleased to see the swift response of both the RFU and Saracens to Billy Vunipola’s recent social media posts,” a statement read. “As the quick response from both the RFU and Saracens in this case shows, rugby remains overwhelmingly supportive of the LGBT community and a sport that is open to everyone regardless of you sexual orientation or gender identity.”

Folau must inform Rugby Australia by Wednesday morning if he is to appeal against their decision to terminate his contract after writing on his Instagram account that “hell awaits” for “homosexuals”. If no appeal is forthcoming, his union career is over Down Under and there is no route back to his league roots after the Australian Rugby League ruled out a return due to his homophobic remarks.