Bell tolls for FAI as stakes are raised at Oireachtas hearing 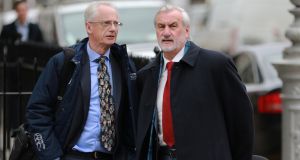 Notre Dame can count herself lucky. She might have lost her spire and her roof and seen centuries of history disappear in a couple of hours. But at least she kept her dignity.

Down at the Oireachtas, meanwhile, the FAI lies in ashes. All government funding stopped for the foreseeable future – definitely for months, possibly for up on a year. Some board members are already gone, the rest of them have committed to stepping down en masse in short order. There is talk of criminal charges being brought, audits are coming down the line. And John Delaney is still on the payroll.

We were sitting in the lobby outside Committee Room Four when the day’s news broke. The FAI’s auditors Deloitte had filed a notice with the Companies Registration Office to the effect that the association wasn’t keeping proper accounts. This moved the whole thing on to a new plane altogether.

It’s one thing for a bumbling honorary treasurer to claim the FAI only has one bank account when in fact they had 24. It’s another for them to have to lawyer up and defend themselves in company law.

For anyone who has kept an eye on the FAI over the years, it won’t be a moment too soon

So for anyone keeping score, in the past month the FAI has been the subject of at least two referrals to the Office for the Director of Corporate Enforcement, one report to the Companies Registration Office as well as sundry reviews and investigations, acres of newsprint and hours of airtime.

All that and, in a moment of grim comedy on Monday night, had its vice-president pictured in the back of a car with a jacket obscuring his head, apparently in a blind panic at being identifiable as part of the whole farrago.

And let’s face it – who could blame him? Noel Fitzroy, for it was he, wouldn’t be a name readily known to most people. A junior soccer stalwart from the United Churches League in Dublin, he’s due to ascend to become president of the association in 2020. Or he was, before current president Donal Conway confirmed to the minister for sport on Monday night that the whole board – Fitzroy included, presumably – will step down in the coming months.

For anyone who has kept an eye on the FAI over the years, it won’t be a moment too soon. Sport Ireland CEO John Treacy was asked to compare the governance of the FAI under Delaney to the Olympic Council of Ireland under Pat Hickey. Treacy didn’t spare the rod.

Even as they met, the FAI knew about the Deloitte news

An FAI board member literally unwilling to show his face to a gaggle of photographers is probably a bit extreme but in this context, you might see where he’s coming from all the same. It suited the FAI board for years and years that Delaney was the only celebrity administrator in Irish sport. Now that the great man’s greatness is, shall we say, up for debate, the Conways and Fitzroys and Eddie Murrays of the world are revealed as the power behind the throne.

It all calls to mind Colm McCarthy’s immortal account in Vanity Fair of the night Patrick Neary went on Prime Time during the financial crisis in 2008. “What happened was that everyone in Ireland had the idea that somewhere in Ireland there was a little wise old man who was in charge of the money, and this was the first time they’d ever seen this little man,” says McCarthy. “And then they saw him and said, ‘Who the fuck was that? Is that the fucking guy who is in charge of the money?’ That’s when everyone panicked.”

The longstanding sorrowful mysteries of the FAI and its workings are comparatively small beer, of course. And yet the parallel stands. For most people, the FAI started and finished with Delaney. But it was always the board who facilitated him. And now, with him famously precluded from comment, they are laid bare. And they are not, to put it politely, doing well.

Even ahead of this meeting, Sport Ireland met with the FAI on Monday night. Treacy’s opening statement to the committee outlined a productive meeting, during the course of which agreement was reached between the two bodies on the Sport Ireland rep on a governance review group. He presented it as an encouraging first step towards reform in the association.

But even as they met, the FAI knew about the Deloitte news. They had to know that the news would come out in public ahead of Sport Ireland’s appearance in front of the committee. They didn’t say a word about it and Sport Ireland only found out about it at the same time as everyone else.

“I want no more surprises,” said Sport Ireland chairman Kieran Mulvey. “I want no more drip feed. I don’t want to keep reading in the newspapers the things that I need to know.

“I’ve been dealing with this area, industrial relations, for a long time. I don’t think I have stupid written across my forehead. If I find that this committee is dealing with us in anything other than an upstanding and straightforward manner, I will not be slow to come back here and report it.”

So plenty of fine words, all around the room. Meanwhile, the FAI board was out there somewhere, slated to remain in place at least for the next few months while they work out how to go about all the root and branch stuff.

And John Delaney is still on the payroll.