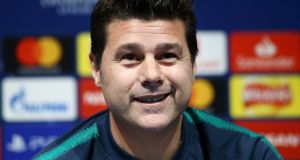 Tottenham Hotspur manager Mauricio Pochettino: ‘It is good that people like Ronaldinho think you have the quality to win.’ Photograph: Getty Images

Mauricio Pochettino was relaxed enough before Tottenham’s quarter-final second leg with Manchester City to agree with Ronaldinho’s claim that his team can win the Champions League.

“Why not?” was Pochettino’s response, his mood in direct contrast to that of his opposite number, Pep Guardiola, whose pre-game demeanour was intense.

Tottenham hold a 1-0 advantage going into Wednesday night’s decider at the Etihad Stadium and Pochettino was all smiles when the retired Brazil great’s view was put to him. “Wow – he knows a lot about football and I am going to respect him,” the Spurs manager said. “He was a great team-mate when we played together in PSG – we spent amazing time together on the pitch, training ground.

“In football, all can happen; like in life, you must believe and have trust in yourself and your ability and quality. It is good that people like Ronaldinho think you have the quality to win. That increases our belief. Maybe tomorrow we will be able to beat an amazing team like Manchester City.

“I learned a lot from him – laughing, smiling, dancing. If you want to play well, you have to be happy and smile. I learn a lot from the Brazilian players but spending nearly three years with Ronaldinho was amazing.”

Pochettino even teased a Spurs press officer who moved to close down the media briefing, telling him he was having fun being in a Champions League quarter-final – the first of his managerial career.

Guardiola’s more serious demeanour illustrated what is at stake for City as they chase the quadruple, the manager perhaps at his most uptight this season.

Spurs are without Harry Kane because of an ankle injury. Guardiola once called Spurs the “Harry Kane team”, which caused Pochettino some irritation, and City’s manager gave a clipped response when reminded of this and asked how he rated Tottenham without their captain. “The same strong team they had three years ago, last season and this,” he said. “Incredible top team.”

There was a similar vein when Guardiola was asked whether there was more pressure on him to claim the Champions League. “I have to win,” he said, adopting a sarcastic manner. “The chairman [told] me I have to win three times in a row – that was his desire. In football you lose more than you win. You try to improve on the fella before. We try to do our best.”

Guardiola offered a grumble about the amount of time City have had to prepare compared with Tottenham. “I love this kind of challenge. I know they had six days and we had two [actually three, using the same measure] before the first leg,” he said. “Then they play Saturday and we play Sunday [before the second leg].”

Underlying this is the tilt at winning four trophies and the physical drain on his players. Yet Guardiola sent a message that tiredness can be no excuse. “Tomorrow is not a lot about physical condition,” he said. “It’s do they want to get through to the semi-finals.”

City’s hopes of winning the Champions League and Premier League could vanish in the next three matches. Wednesday’s meeting is followed by Tottenham’s return to the Etihad for Saturday’s league meeting; City then to travel to Manchester United for next Wednesday’s derby.

“If we don’t win these games we will be out in two competitions,” he said. “They are absolute finals for us. Last season in this period we were already champions. But this season we have an incredible opponent in the Premier League: Liverpool. Normally the title is won with 84, 86 points – then you are champions. They have 85 [with four games left to play], so both teams deserve to be champion but one is going to get it.”

Guardiola’s demeanour was contrasted by an upbeat John Stones. He was emphatic regarding the prospect of the quadruple. “I don’t think a lot of things are impossible,” he said. “That is the mindset of different people and if you don’t dream then you are not going to get anywhere near it. It comes from within everyone. We have this belief and ambition to do it. Like last season, 100 points never done before. We won the league quite early and still had the belief to go on and do it.”

Hugo Lloris offered no doubt how difficult it will be to progress against City. “It’s about the mentality, the spirit,” Tottenham’s goalkeeper and captain said. “We are ready to suffer. We are going to suffer. But we can make the game difficult too.

“It’s about enjoying it at this stage, to be ready to compete. As we know we’re facing one of the best teams in Europe – they have so much quality in the squad.

“One-nil was a good result but we need to forget about that and try to use it. We’ve got to have a lot of effort to make but it’s important we use our brains as well. We have to finish the game with the feeling we gave everything.”