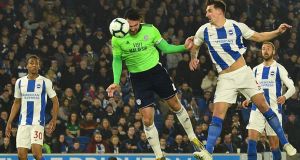 This was the kind of result to stoke Cardiff’s bid for survival with conviction rather than mere hope. The gap to safety and Brighton has been shredded to two tantalising points and, judging by the panic which had overwhelmed the hosts long before the final whistle here, with all the doubt transmitted from stands to pitch, momentum is with them. Given everything the Welsh club has endured this term, to be in such contention feels miraculous.

Albion, a team on the slide, may have been there for the taking but the manner in which Neil Warnock’s team coped with the pressure was still admirable. Their margin for error, with four games now to play, is still slender given two of those remaining fixtures are against Liverpool and Manchester United, but the others – Fulham and Crystal Palace – are suddenly appealing.

Brighton offered no evidence to suggest they can recover their own poise in what time remains, with this a fifth successive defeat in all competitions. Belief has drained away.

For all the anxiety which had gripped the locals, reeling in the aftermath of Saturday’s worst ever defeat in this arena, the onus had always been on the visitors to seize the initiative in Sussex. Their own loss to Burnley at the weekend, with its customary dose of controversy, had felt hugely damaging given the daunting nature of their run-in. Recent wretched form had to go ignored. They simply had to prevail on the south coast and, while there was plenty of frenetic pressure to absorb, an abrasive core and slippery forward line had provided a platform from which to spring.

They hassled and harried, discomforting Albion’s jittery central midfielders whose erratic passes, each provoking wails of anguish from the majority present, betrayed the uncertainty that had been eating away at Brighton’s approach of late.

Aron Gunnarsson, the kind of street fighter suited to this kind of scrap, and Joe Ralls were all tigerish energy, revived as if this was a fixture plucked from the tail-end of their Championship promotion campaign. Their centre halves were rugged and aggressive, Bruno Ecuele Manga escaping sanction for hauling down Lewis Dunk in the penalty area and dominating in the air. Yet they had still needed something jaw-dropping to force the issue properly.

Midway through the first half another Brighton attack ran aground just outside the penalty area, with Nathaniel Mendez-Laing sprinting up-field in possession with no opponent close enough to muster a challenge. The free transfer signing from Rochdale would exchange passes with Junior Hoilett on the flank, Albion defenders waving him through, before whipping a sumptuous shot from distance across Mat Ryan and into the far corner. Even Mendez-Laing looked slightly startled at the majesty of it all as he tore to the bench, team-mates in pursuit, to celebrate.

Brighton rarely played like a team capable of recovering even from that setback. Perhaps had their own initial urgency secured an advantage – Solly March had found the side-netting after 64 seconds, with Neil Etheridge’s subsequent slide denying Glenn Murray a run on goal – then they might have exerted some level of control on the helter-skelter, but too much of this was frantic and unsettling.

Instead, they looked a side who had won only twice in the league this year, with even the confidence of Dunk and Shane Duffy, once the group’s forte, long since shattered. Cardiff had already threatened to exploit that newfound fragility when, five minutes into the second half, Victor Camarasa floated an inviting free-kick into the six-yard box. Sean Morrison, having escaped Murray with the slightest of nudges, leapt unchecked behind Dunk – horribly drawn under the flight of the ball – to thump his header down and across Ryan.

That prompted more frustration to rain down on Chris Hughton, the man who had masterminded this team’s rise from the second tier, as the owner Tony Bloom looked on grimly from the directors’ box. Albion may still boast a game in hand, but their own quintet of fixtures to come – with four against the top eight – appears grim given the manner in which they were outmuscled and beaten so efficiently here.

Cardiff had only won one of their previous seven fixtures, yet Morrison’s last ditch tackle to smother Florin Andone’s late attempt rather summed up the evening. The boos at the final whistle said it all. – Guardian