Liverpool won’t be blinded by glowing praise from Porto coach 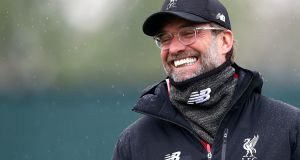 Liverpool manager Jürgen Klopp: ‘We need to play at 100 per cent and not just try to come through somehow.’ Photograph: Jan Kruger/Getty Images

James Milner has said Liverpool cannot be considered among the best teams in the world until they win a trophy under Jürgen Klopp – and that the Champions League and Premier League offer the perfect opportunities to end that wait this season.

Liverpool take a 2-0 lead into Wednesday night’s Champions League quarter-final second leg in Porto, who they defeated 5-0 on aggregate en route to last season’s final in Kiev. Sérgio Conceição, the Porto coach, paid a glowing tribute to the Premier League leaders ahead of their latest encounter and said Klopp’s team embody “all that I like about football”.

Milner accepted the praise as recognition of Liverpool’s development under Klopp. However, the 33-year-old was frank in his assessment that defeats in the Champions League, Europa League and League Cup finals meant Liverpool could not yet lay claim to such an elevated status.

“That’s a nice compliment and you get those compliments by playing good football over a sustained period,” said the midfielder. “But to be that, you have to win trophies. That’s something we haven’t done yet and something we are trying to do this season. There are a lot of good teams left in the Champions League and it’s down to use to prove that and win these games and hopefully win at least one trophy this season. But there are a lot of good teams between us and the last game of the season. We have to keep improving and keep playing as we have been at the moment.”

Klopp has never lost a two-legged European tie as Liverpool manager, and Milner believes the experience gained over recent seasons can help this group of players land the biggest prize in Europe, England or both in the coming weeks.

Not getting over the line is disappointing. We have the opportunity to change that

“There has been a lot of talk outside the dressing room for a long time about the first title in years, but as a group we are focused on our targets and concentrate on what’s going on in the dressing room,” he added. “Getting to three finals during my time here has helped with experience.

“We have been gaining a lot of European experience in getting to the Europa League final and Champions League final. But not getting over the line is disappointing. We have the opportunity to change that. That first one is always the hardest.”

Klopp also refused to be bowled over by his opposite number’s compliments, speculating – correctly – that Conceição “will also have said he believed in his team’s chances”. Porto have failed to score in three games against Klopp’s Liverpool, but have won all four home matches in the Champions League this season. They overturned a 2-1 first-leg deficit against Roma in the last-16 tie at Estádio do Dragão. That second leg formed the basis of the Liverpool manager’s preparations at Melwood.

“There’s no risk that I need to convince the boys that Porto are really good. They know it already,” said Klopp, who has Joe Gomez back in the squad but will be without Dejan Lovren through illness.

“We were sitting there for 45 minutes in the meeting this morning talking about this team. Part of it was about how they played in the second leg here against Roma. We played Roma and they can be an uncomfortable opponent, but I didn’t really see a chance for them that night as Porto were in control of that game. We should be prepared.

“Porto were really good in the first leg but we were just really good and we need to be really good again. We need to play at 100 per cent and not just try to come through somehow, otherwise we’ll struggle to handle the power they can create here.

“I watched their derby against Lisbon here years ago. It was so loud. The crowd here know how to influence a game and influence an opponent. We have to be ready for that atmosphere.”