Hallucinatory viewing as Dublin and Tyrone do battle with Storm Jorge 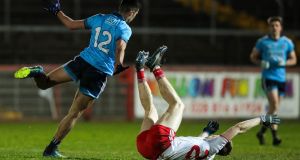 Colm O’Rourke took one look at the pictures coming through from Healy Park on Saturday evening and, probably much like the rest of us, could only think of the storm warning General Eisenhower received from the Mullet peninsula back in 1944, the one that delayed Operation Overlord.

“A weather station in Mayo was able to call off the Allies’ landing in Normandy – now they can’t even call off a match in Omagh,” he said.

Joanne Cantwell and Tomás Ó Sé didn’t know quite how to respond to that, both rendered temporarily mute, but Colm had a point.

If a storm warning from Blacksod weather station 76 years ago could have persuaded Eisenhower to delay the movement of 5,000 ships, 11,000 aircraft and 160,000 troops, then surely Met Éireann’s weekend alert could have stopped the movement of Dublin and their supporters up to Omagh for their League game?

The RTÉ panel suspected General Mickey Harte might have had something to do with the game going ahead, despite the ball only hopping as high as the referee’s shoelaces when he carried out his pre-match pitch inspection.

By the looks of it, many a melon was twisted in the tunnel at half-time during that shemozzle

And once it started, it was quite an hallucinatory experience for telly viewers, the sheets of rain on the camera lenses making the lights in the ground dazzle in a rather psychedelic manner, the squalls that rocked the place giving the impression that Healy Park was trippin’.

If Ger Canning and Kevin McStay were keeping an eye on their monitors, the experience would have reminded them of the last time they stood in a mosh pit together at a Happy Mondays concert. All we needed to confirm this was for Ger to turn to Kevin and declare: “You’re twistin’ my melon, man.”

By the looks of it, many a melon was twisted in the tunnel at half-time during that shemozzle, but the night’s very best prize-fight was between Tyrone goalkeeper Niall Morgan and Storm Jorge, Morgan ending up the undisputed champion of Omagh. He aimed his free-kicks towards Helsinki knowing that would boomerang them over the bar in Healy Park, and four times, supernaturally, he got it spot on. The other free-kick-takers largely made the mistake of aiming the ball at the Outer Hebrides, only to see it end up in North Dakota.

If George Hamilton had false teeth, they would have ended up in North Dakota too

The game’s clinching score, though, came from Tyrone’s Rory Brennan, one that left Dublin slayed. But lest we thought that that Waterford Whispers headline was a bit previous – “Dessie Farrell appointed 2020’s All-Ireland winning manager” – Colm told us to disregard the result, that losing a league game in Omagh in the middle of a storm at the end of February did not necessarily mean the Dubs are done for.

He gushed over the winning goal, though, describing it as “a Jordan Flores-type finish”, which, after the Dundalk player’s humdinger in Tallaght on Friday night, is now the greatest compliment you could possibly pay to a net-busting effort in any code. If George Hamilton had false teeth, they would have ended up in North Dakota too when he attempted to describe the manner in which Flores inserted the ball in the net. “In the words of the late, great Jimmy Magee,” said Peter Collins, “DIFFERENT CLASS! DIFFERENT CLASS!’”

And no one was blaming Shamrock Rovers goalie Alan Mannus, unless you think human hands should be able to gather Exocet missiles, unlike at Goodison Park on Sunday when Graeme Souness and our Roy had their Stanley knives out for David de Gea and Jordan Pickford after their respective bloopers.

On de Gea. Roy: “You’d kill him! You’d kill him! I’d have lynched him at half-time!” Graeme: “He was like a sack of King Edwards. They’re potatoes, David.”

On Pickford. David Jones: “In fairness to him, the ball was moving quite a bit.” Roy: “The ball’s moving?! Of course it’s gonna move when someone’s kicked it!”

Graeme: “I see him dancing at a wedding, I see him shooting hoops, and there was something else.”

Roy: “I think he was at a fashion show.”

You could almost hear Storm Jorge sighing. Like he did, rather lustily, at Thomond Park for Munster’s meeting with Scarlets. “Strings lost his hair to a day like this about six years ago,” said Donncha O’Callaghan. Peter Stringer nodded forlornly. “You might need to hold on to him so he doesn’t blow away on us,” said Tommy Bowe. “I’d snuggle in to him only it’d be like holding a Siamese cat,” said Donncha. “Miaow,” Peter should have replied.