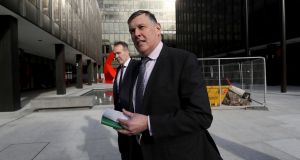 “The figure for lost revenue is currently estimated to be €5 million-plus,” said an IRFU spokesman who added: “This may increase if the Pro 14 and European Champions Cup experiences [fixture] issues.”

The union are not insured against loss of revenue caused by the coronavirus. The clubs – who purchase the majority of tickets for internationals at the Aviva Stadium and generate profit by reselling them in packages – have already paid for these tickets but they would be entitled to full refunds in the event of the game being permanently cancelled.

A Six Nations weekend in Dublin generates approximately €30 million for the entire economy.

Tournament organisers will be guided by the governments of each country.

Ireland’s final Six Nations fixture against France – in Paris, on March 14th – is under real threat of not going ahead after French health minister Olivier Veran placed a “temporary ban” on “all public gatherings of more than 5,000 people in a confined space” across the entire country as the number of confirmed coronavirus cases continues to rise.

“These measures are temporary and we will likely have to revise them,” Veran added. “They are restrictive and paradoxically we hope they don’t last long because that means we will have contained the virus’ spread.”

England’s trip to Rome, also on March 14th, looks certain to be cancelled as Italy struggles to contain outbreaks in three northern regions.

It remains unclear if contingency plans similar to the World Cup, when three 0-0 draws were declared due to Typhoon Hagibis, could be put in place by the Six Nations.

The Ireland versus Italy match cannot, it seems, be rescheduled until October. The IRFU are contractually obliged to hold internationals at the Aviva Stadium, and considering the congested fixture list – especially if Leinster follow up victory over Saracens on April 4th with a Champions Cup semi-final at the venue – and three games in soccer’s Euro 2020 set for Dublin, the stadium is effectively unavailable until August.

However, the IRFU are unlikely to break with player welfare protocol by hosting a Test match in the wake of the two-Test summer tour of Australia.

There is precedent for the Six Nations being completed outside its traditional window. Due to the outbreak of Foot and Mouth disease in 2001, Ireland games were fulfilled against Scotland on September 22nd, Wales on October 13th and a famous victory over England on October 20th.

Another topic potentially on the agenda in Paris is the £300 million deal for the Six Nations and new investors CVC to put broadcasting behind a Sky Sports pay wall, as reported by the Rugby Paper. Seemingly, the current BBC and ITV sharing deal, which runs out next year, will be outbid by Sky, with BT and Amazon other potential bidders. Virgin Media’s four-year deal to televise Ireland matches ends after 2021.

Leinster, meanwhile, are supposed to travel to South Africa later this month for a two-match tour against the Cheetahs and Southern Kings.

“There is lots of uncertainty out there,” said Leinster coach Leo Cullen following a 55-19 victory over Glasgow on Friday night before adding, “There is no indication [of games in Bloemfontein and Port Elizabeth being cancelled]. We are full steam ahead for that trip at the moment.”