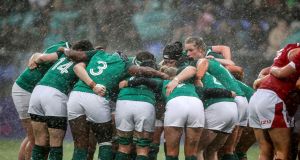 The Ireland team huddle in the tough weather conditions during the women’s Six Nations match against Wales at Donnybrook. Photograph: Dan Sheridan/Inpho

It was the kind of weekend where if you attempted a Garryowen the ball may well have ended up in Newfoundland, although there was a spell in that second half in Donnybrook on Sunday afternoon when you worried the two teams on the pitch might end up there too.

“We were expecting Ciara in the first half, but she didn’t come ’til the second,” said player of the match Cliodhna Moloney afterwards, it being a woman’s prerogative to be a touch late, although when Ciara finally turned up, she very much made her presence felt.

“THIS IS BIBLICAL STUFF, HONEST TO GOD,” said Hugh Cahill, himself and Fiona Coghlan considering swapping their microphones for snorkels.

The only people in the entire stadium who didn’t seem to be inconvenienced by the squally deluge were the Irish team, their five-try-bonus-point-winning triumph over Wales suggesting that the weather suited them grand. A triumph that included another moment of magic from “The Ballinasloe Bomber”, as Daire O’Brien described her, Beibhinn Parsons storming, so to speak, through the Welsh defence to score a highly lovely early try.

That win lifted Ireland to the top of the Six Nations table, but just for now – England’s game against Scotland postponed because of the weather. The absolute wusses.

And the lads went top of the table too on Saturday after beating the Welsh, (only to be usurped by the French come Sunday), the duel of the day actually taking place after the game when Matt Williams and Ronan O’Gara squared up in a back-and-forth that was, at a minimum, befuddling.

“That was a bloody great victory,” ROG declared, but Matt was having none of it. “That’s the minimum that is expected from those players and coaches.”

ROG: “I disagree with you.”

ROG: “I can certainly tell you that’s not the minimum, that’s a bonus point win over Wales, I don’t think you have any idea how difficult that is.”

Matt: “I’m talking about effort, commitment and thought. There was more in that game that we have seen in the last 12 months.”

Matt: “If you play below that minimum you’ll lose, though.”

ROG: “They didn’t – they smashed them today!”

ROG: “But that’s not the minimum, though.”

Exchange of the day

The exchange of the day, though, took place on the BBC after England had beaten Scotland, ably assisted by Ellis Genge’s try 10 minutes from time, in conditions that reminded Matt of what he was told when he arrived in Scotland to coach: “There are two seasons – June and winter.”

Sonja McLaughlan had the honour of chatting with Ellis, armed with a bottle of beer, post-match.

Sonja: “Give us your thoughts on the moment you scored the winning try in a Calcutta Cup match?”

Sonja: “Give us a sense of what it’s like in that dressingroom right now.”

Ellis [Takes swig of beer]: “Quiet. A few of the boys are getting drug-tested.”

Sonja: “A good response to the disappointment against France?”

Ellis: “We had a bump in the road last week and everyone was writing us off . . . it’s classic, innit? You’ve got a lot of sausages saying things that just come to their heads. What are they on about? D’you know what I mean?”

[Takes another swig of beer].

Ellis: “We go out and win in Scotland in the … I was about to swear, sorry …. in the rain and now everyone’s singing our praises. Whatever, innit?”

The records need to be checked, but this might have been the first time a beer-swigging rugby player called rugby commentators sausages live on the BBC. At a minimum it was Biblical stuff, honest to God.