Kildare get back on track with win over Laois 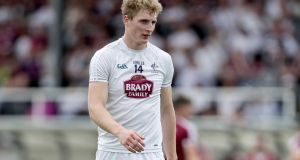 Daniel Flynn was at his best as Kildare saw off Laois. Photo: Laszlo Geczo/Inpho

After three losses on the trot, Kildare got back to winning ways in MW Hire O’Moore Park as they proved too strong for Laois in their re-scheduled Division 2 game.

The win was vital in Kildare’s battle against the drop as they move to four points while Laois still have a bit of work to do to ensure their own survival with two games remaining.

This game was re-fixed for Sunday afternoon having fallen victim to Storm Jorge on Saturday but Kildare were worthy winners as they stretched their unbeaten run against their neighbours in league and championship to seven games.

In fact the five-point winning margin scarcely did them justice as they were dominant from the early stages.

They began this game meaning business. They were four points up after as many minutes and were dominating possession.

Daniel Flynn was prominent and Paul Cribbin saw plenty of ball and it took Laois until the 14th minute to register a score when Evan O’Carroll pointed a free after being fouled himself.

That was cancelled out by big midfielder Tommy Moolick and though Sean O’Flynn responded with a nice point from play off his left, Niall Kelly, Kevin Feely (free) and Liam Power pointed to help Kildare into a 0-8 to 0-2 lead after 28 minutes.

But for all their dominance they struggled in front of goal and kicked 11 wides in total in the opening half.

O’Carroll pointed from play after a long ball in from Mark Timmons when he had a brief chance of a goal and then the Crettyard man added another free, again after being fouled himself.

At the break Kildare led 0-8 to 0-4 and they extended the lead early in the second when Paddy Brophy pointed.

Laois saw a goal chance go astray when Colm Murphy was denied by Mark Donnellan and though Niall Corbet did drill over a fine long-range free, Kildare got the next four points, three of them from Adam Tyrell.

Laois applied themselves as best they could but Kildare weren’t to be denied and they had five points to spare in the finish.

Both sides have a two-week break now until their next game – with Kildare at home to Cavan and Laois away to Westmeath on Sunday, March 8th.