United States close in on Walker Cup title in California 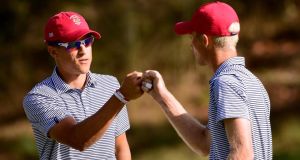 Cameron Champ and Will Zalatoris of the United States celebrate a birdie to win the seventh hole over David Boote and Jack Johnson of Great Britain and Ireland during the Sunday foursomes matches at the Walker Cup at Los Angeles Country Club. Photograph: Harry How/Getty Images

The United States took a sizeable step towards reclaiming the Walker Cup with a commanding display in Sunday’s foursomes in California.

Leading 8-4 overnight, the Americans eased themselves to 11-5 and within two and a half points of victory at the Los Angeles Country Club, leaving Great Britain and Ireland in deep trouble ahead of the 10 singles matches.

Norman Xiong and Collin Morikawa led the way with a two-up victory over Connor Syme and The Island’s Paul McBride, although the match was all square as the pairs left the 15th green before an American birdie at the 16th and a bogey from their opponents at the last proved decisive.

Life proved significantly more straightforward for Will Zalatoris and Cameron Champ, who needed just 13 holes to secure a 6&5 win over David Boote and Jack Davidson, while Doug Ghim and Maverick McNealy were 3&2 victors against Matthew Jordan and Robert MacIntyre.

Only Jack Singh Brar and Scott Gregory registered for Great Britain and Ireland with a two-up success against Braden Thornberry and Doc Redman.