With the monkey off his back, G-Mac is ready to roar ahead 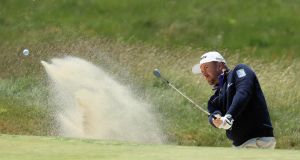 Graeme McDowell of Northern Ireland plays a shot from a bunker during practice rounds prior to the 2018 US Open 2018 in Southampton, New York. Photograph: Andrew Redington/Getty Images

The monkey on his back has gone for a sabbatical, maybe never to return. For weeks and months earlier this year, Graeme McDowell – straining to get inside the top 125 on the FedEx Cup standings on the PGA Tour – felt its weight and, more than that, heard it.

“He’d start talking, nibbling in my ear at the weekends. ‘Hey, you can do with a big finish this week so we don’t have to worry,’” said McDowell, recalling the stress of it all.

Thing is, G-Mac still hasn’t managed to break inside that magical number to retain his tour card for next season (he’s currently 136th); not yet, anyway. But he is stress-free, playing well again on the back of a couple of decent finishes in Europe last month with a top-15 at Wentworth and top-five at the Italian Open, and with a spring in his step as he anticipates competing and contending in this 118th US Open championship on a course that he believes suits his game and his mind.

McDowell – champion at Pebble Beach in 2010, the player who broke the hoodoo on European players that had stretched back a full four decades – arrived on this old native Indian land last Saturday for a first look and, from initially walking the course to then playing it, the challenge of what lies ahead in the coming days has only served to instil a sense of anticipation.

In recent years, as the USGA took its showpiece championship to courses like Chambers Bay and Erin Hills, where the game’s big-hitters had an immediate advantage, leaving the likes of McDowell behind in what seemed like different time zones, there was a sense of defeat before the contest ever got going. But not here, not now. This is a different kettle of fish, a throwback.

“I like what I see out here. I think there is a premium on accuracy off the tee, but you have to be on with your iron play here. The short game around here doesn’t really matter if you are Phil Mickelson or not, you are not going to be able to get the ball up and down successfully from some of these really steep runoff areas, and if you get on the wrong side of flags it is going to punish you. I think it is a great track, I like the way it sets up.

“I like this course a lot, it has definitely exceeded my expectations. I like some of the subtle architecture of it, the way the green shapes are built.”

At the end of the day, that 125 thing, it is not do or die for me, I have got plenty of things to do if I was to lose my card

McDowell wasn’t here for the last US Open in 2004 – he’d just won the Italian Open the previous month but didn’t make the field – and doesn’t even recall watching on television. “I must have been travelling somewhere.” But he wanted to see for himself what happened and, on Monday evening, in his rented house, watched a DVD of that infamous final round when players struggled to keep the ball on baked greens. “Crazy tough,” is how McDowell appraised what he saw on playback.

It won’t get to such extremes this time, although the links is expected to firm up as the days go by, and McDowell is focused on the task ahead. “I didn’t see anything out here to upset me . . . apart from [the 18th], there’s not a hole out there where I look and go I am at a disadvantage here. I like the way it sets up.”

Those two weeks back on the European Tour last month, along with his appointment as Ryder Cup vice-captain to Thomas Bjorn, combined to provide fresh perspective to McDowell. That monkey has stopped talking in his ear.

“At the end of the day, that 125 thing, it is not do or die for me, I have got plenty of things to do if I was to lose my card. I could go back to Europe, get a few starts here; it wouldn’t be the end of my life . . . I would still like to get it done, so I can go back for the summer and play France, Ireland and Scotland and enjoy myself and not have to worry about it again . . . this is a Major, this is different. The focus is going to be on the golf course and trying to get around here.”

To do that, he has plotted a strategy with his caddie Kenny Comboy these past few days. He’s ready for this one.

Davy Russell ponders what might have been for Tiger Roll 18:07
Cycling Ireland thrilled with take-up for Zwift League series 17:02
Racetrack organisation does not envisage any closures in the short-term 15:03
Coronavirus crisis could cost the GAA up to €60 million 14:19
Eddie Hearn: Tyson Fury is Anthony Joshua’s opponent of choice 12:55
Here is your handy guide to sport on television this week