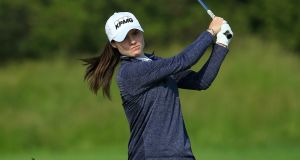 Remember Tiger Woods’s “hello world” moment on his professional debut? If that was a contrived marketing introduction to his paid career (back in 1996), we all know the impact that he made; and, without any such notions, Leona Maguire marked her entry into the world of professional golf by letting her clubs do the main talking with a top-15 finish in the ShopRite LPGA Classic at Stockton on the New Jersey shore.

The 23-year-old Co Cavan golfer made a hugely favourable impression on her professional debut, on a sponsor’s exemption, with rounds of 69-67-69 for a total of eight-under-par 205 as she hit the ground running on her move into the paid ranks.

Maguire’s final-round 69 featured five birdies – on the fourth, fifth, ninth, 16th and 18th – along with three bogeys. Her left-to-right 20ft eagle putt on the 18th finished just inches from the hole, allowing her to tap-in for a closing birdie.

Of the transition from amateur to professional, Maguire remarked: “I felt pretty calm. I think it doesn’t feel all that different really. I’m just really playing my own game.”

With the backup of a Symetra Tour card, Maguire and her sister Lisa will head onto that development tour – the pathway to the LPGA Tour – for the Decatur-Forsyth Classic tournament in Illinois this week.

While Maguire made a strong start to her professional career, the tournament title was won by another 23-year-old: Annie Park, a native of Long Island, New York, started the final round four shots behind Sei Young Kim but shot a final round 63 for a total of 16-under-par 197 to claim a breakthrough win on tour.

Park first earned her full tour card back in 2015 when she topped the Symetra Tour order of merit, the route that Maguire will now hope to use in the coming weeks and months to secure her full card on the main circuit.

Park, ranked 236th in the world rankings heading into the event, had a stroke to spare over Japan’s Sakura Yokomine who finished with a final round 61, needing to chip-in for eagle from greenside rough on the 18th for a 59 but ultimately only managing to close with a par. Instead, it was Park – who started the year with conditional status – got her hands on the Waterford Crystal trophy, the $225,000 cheque and a life-changing win.