Brooks Koepka’s workout regime gets him back in the swing 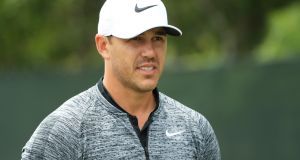 Brooks Koepka of the United States during practice rounds on Monday prior to the 2018 US Open in Southampton, New York. Photograph: Andrew Redington/Getty Images

Once upon a time, anyone with real ambition – of contending, of winning – lived on the range. They were known as range rats. The top players still make a beeline for the driving range, but only after morning workouts in the gym. These days, what goes on in those sessions is as important to players as any swing thoughts.

Brooks Koepka is a case in point. En route to his breakthrough Major title in last year’s US Open at Erin Hills, the American – who has Northern Irishman Ricky Elliott as his trusted caddie – overpowered the course with drives which averaged 322 yards after packing on 10 pounds of muscle in the months leading up the championship.

However, Koepka was sidelined by a wrist injury for the early part of this season, including missing out on the US Masters, suffering what was diagnosed in January as a partial tear in the extensor carpi ulnaris (ECU) tendon, which left him on the outside looking in for almost four months.

But Koepka has returned to tournament play – and the gym – without any undue stress following his rehabilitation period. And, after dipping his toes back into competition with a tied-42nd place finish in the Wells Fargo, he has finished tied-11th in the Players, runner-up in the Fort Worth Colonial Invitational and was tied-30th behind his good friend Dustin Johnson in the FedEx St Jude Classic.

Remember, Johnson was the one who effectively took Koepka under his wing when, having played his formative golf on the European Tour, he gained his PGA Tour and moved back to Florida. On informing Johnson that he was about to rent a house while his own was being renovated, it was Johnson who suggested moving in. And, for six months, Koepka lived with Johnson and his family and got a close-up look at DJ’s upward trending to world number one – and how hard he worked to get there.

Johnson, as it happens, is a frequent gym workout companion, where the world number one’s oft-used put-down line goes, “Take your diaper off and start lifting real weight!”

The reality is that Koepka, better than most, is the one who can live with DJ’s expectations in the gym, be that lugging medicine balls, or pounding weights. It’s just that Koepka prefers variety rather than concentrating on the heavy workouts; away from the gym he loves cycling and to paddleboard, for example, which strengthens his core and builds endurance. Look on it as an outdoor gym session.

As he put it, “anytime you’re outside and working on water, it’s fun.”

There are those who wonder if too much is, well, too much. Critics of gym workouts and suchlike claim players can lose flexibility and become musclebound. Koepka is not one of them. “The funny thing is, if you look ar some of the strongest athletes in the world, they’re gymnasts . . . and they’re the most flexible. I don’t know what else to say to that, other than you can be very strong, very flexible and still be able to move.”

As important as body-shaping, in Koepka’s opinion, is that physical workouts also boost the mental side of a player’s game. “I feel like if you outwork everybody, you’re giving yourself the best opportunity every time you go into an event. You put in the work, the results will come,” said Koepka.

A year ago, Koepka got the result he most cherished when winning the US Open. Now, he is back, fit and healthy and strong as ever, to defend.