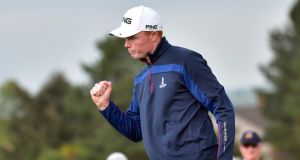 Newly crowned Irish Strokeplay champion Robin Dawson is one of four Irish players named in the Britain and Ireland squad for the St Andrews Trophy.

Ireland’s Robin Dawson, Alex Gleeson, Caolan Rafferty and Rowan Lester have been named in the 20-strong Britain and Ireland squad ahead of July’s St Andrews Trophy match in Finland.

Scotland’s Craig Watson will Captain the nine-man team that will face the Continent of Europe at Linna Golf from July 26th-27th. It will be his second match in charge following the 12.5- 12.5 tie at Prince’s in Kent in 2016.

Watson returns to the role after missing the Walker Cup match in September last year due to a family bereavement.

“I’m very much looking forward to the St Andrews Trophy,” he said. “I’m delighted to resume the role and am excited about the potential of the new crop of players coming through and contending for a place in the team.”

With many of the 2017 Walker Cup team having turned professional following the 19-7 defeat by the United States in September, only England’s Matthew Jordan returns to Watson’s St Andrews Trophy squad.

The 22-year-old is the highest ranked GB&I player in the World Amateur Golf Ranking (9th) after recently capturing the Lytham Trophy with a nine-shot victory.

Long wait over for Elm Park

Elm Park bridged a 48 year gap when they won the East Leinster ILGU Senior Cup with a 3-2 win over The Island at Malahide. Their last win was in 1970 and in an exciting final against The Island the title was not decided until the last green in the final match when Mary Francis McKenna secured the vital third point with a one hole win over Karen McAllister.

In the semi-finals Elm Park beat Hermitage while The Island accounted for Laytown and Bettystown.

Roscommon won the Connacht title with a 3½ - 1½ win over Athenry with Chloe O’Connor, Ciara Herward and Mary Landers winning their matches. Roscommon beat Galway Bay in the semi-final with Athenry edging out Ballinasloe 3-2.

The Heath are also heading for the All-Ireland finals at Knock Golf Club in August after their 3-2 win over Kilkenny in the Mid Leinster final. Meadhbh Doyle, Mary Doyle and Catherine Reilly securing the necessary points. In the Marie Croke Plate final Mullingar were clear winners over Castlecomer 4½ - ½ .

Disappointment for McBride in NCAA Regionals

Ireland’s challenge at the NCAA Regionals ended in disappointment with Wake Forest’s Paul McBride tied 20th on his US college swansong as Wake Forest failed to qualify.

With just five teams and top individuals qualifying from each of the six Regional finals, it was a disappointing week for the six Irishmen hoping to advance to the NCAA Championship finals.

McBride tied for 20th on six-over 219 after rounds of 76, 70 and 73 in the NCAA Columbus Regional, where Wake Forest finished the tournament in eighth place at 35-over.

At the Raleigh Regional in North Carolina, Conor Purcell was tied 61st as an individual competing for Charlotte on seven over 220 after carding 79, 67, 74 with Carton House’s Oisin Devereux (75 77 76 for 228) 70th as Iona College finished 14th.

On a brighter note, Oregon made it to the finals in Stillwater, Oklahoma from May 25-30 thanks to their fifth place finish in the Pacific Regional though Laytown and Bettystown’s Thomas Mulligan did not get to start.

Tullamore’s Stuart Grehan finished second in the Motocaddy Masters on his PGA Europro Tour debut at Frilford Heath. Leading by two shots overnight from former Ryder Cup winner and European Open champion Phillip Price, Scotland’s Paul O’Hara and England’s Will Enefer, he closed with a one-under 71 to go with opening rounds of 70 and 66 to finish a shot behind winner O’Hara on nine-under par.

The Irish Women’s, Girls’ and Seniors Close Championships will this year be hosted by Enniscrone, Clandeboye and Monkstown Golf Clubs.

The links at Enniscrone last hosted a National event when in 2014, Mary Doyle (The Heath) became the first left-hander to win the Irish Women’s Close Championship. The Connacht club is no stranger to hosting big events in their 100 year history and this will be the third Irish Women’s Close to visit Enniscrone in 21 years. Additionally, Enniscrone member Sarah Helly won the title in 2015 at Ballyliffin, beating Olivia Mehaffey (RCDL) in the final. The 2018 Irish Women’s Close will run from June 16th - 19th.

The Irish Senior Women’s Close will head to Monkstown Golf Club, Co. Cork. Suzanne Corcoran (Portumna) will defend her title but no doubt a host of the 2017 successful Irish Home International team will also be in contention as the event gets underway from July 3rd - 6th.

The Irish Girls’ Close Championship returns to the Belfast area for the first time since 2006 when Stephanie Meadow (Royal Portrush) beat Victoria Bradshaw (Bangor) 5 and 4 in the final at Malone. Mairead Martin (Kanturk) who was crowned champion at Mallow last year is now overage and unable to compete which presents an opportunity for a new name to be engraved into the coveted trophy. The cream of Irish Girls golf will decent on the Dufferin course from 18th - 21st July.

Neil O’Briain from Old Conna claimed the PGA Irish Club Professional title sponsored by Carr Golf in dramatic style at Dromoland Castle last week.The 31-year-old eagled the opening hole of a play-off to edge out Eamonn Brady (Clontarf) after they both finished the 36-hole event on four under par.

O’Briain started the final day a full six shots behind round one leader Simon Thornton (Tulfarris Resort) but charged through the field on the back of a six under par 66 - the lowest score of the week.

Mason Jones not interested in being the Welsh Conor McGregor 12:01
Charles Byrnes’ licence withdrawn after runner ‘nobbled’ with a sedative 12:52
JP McManus Pro-Am deferred for a year due to Covid 10:45
James Harden stars as Brooklyn Nets edge Bucks in thriller 09:17
Spanish player says Australian Open quarantine is like prison 09:06
Here is your handy guide to sport on television this week