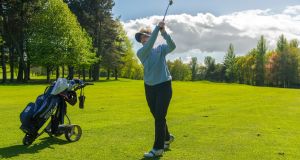 There’s a connection with the past as you make your way around the magnificent Cork Golf Club, a course on Little Island designed by the legendary Alastair Mackenzie. There’s an old wonderfully preserved cart which at one time was used to remove stone from a quarry; and a plaque on a limestone promontory on the sixth hole – known as Spion Kop – which apparently is a throwback to the Boer war.

All quaint and wonderful to be sure, although those involved in the Allianz Irish Times Officers’ Challenge regional qualifier were more inclined to keep their eyes on the grand prize of a ticket to The K Club for September’s grand final: and, as it turned out, the trio of players from Ballybunion, a club celebrating its 125th anniversary, had another reason to celebrate in posting a winning score of 85 points that had them in a different league to everyone else.

Cork – with captain Jerome O’Donovan (11), a winner of the Cork and Douglas Intermediate Scratch Cups in the last three years, claiming two birdies on his card, along with lady captain Maeve Russell (19) and lady president Audrey Bradley (18) – posted 78 points, while the real battle, as it transpired, was for the third (and final) qualifying spot, where Monkstown ultimately edged out Douglas.

As it happened, both Monkstown and Douglas weren’t short of experience: Ada O’Sullivan – a former Irish strokeplay champion and a former Britain and Ireland Curtis Cup team captain – was a member of the Monkstown team, while Kate McCann, another former Irish international, featured for Douglas.

It turned out to be quite the battle, ultimately decided on the 18th green with Monkstown – O’Sullivan (5), Brenda O Riain (18) and Jamie O’Mahony (13) – posting a score of 75 points (two from three to count on each hole) to Douglas’s total of 74. A par from O’Mahony on the finishing green proved critical to his team’s progression.

For someone who played internationally and was an inspirational captain in Curtis Cup, Vagliano Trophy and Espirto Santo (when Ireland were bronze medallists in the world amateur championship in 2016), O’Sullivan – who has maintained a category one playing status since 1980 – enthusiastically embraced the officers’ challenge.

Allianz has supported this unique club event for the past 26 years, and Peter Kilcullen, the chief customer officer with Allianz Ireland, paid tribute to the superb conditioning of the course, and wished all officers well in their year of office.