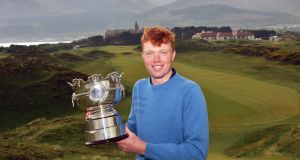 Good things come to those who wait and so it was for Tramore’s Robin Dawson, who bridged a five-year gap in his CV and survived no little back nine drama to win the Flogas Irish Amateur Open by four strokes from England’s John Gough and Castle’s Alex Gleeson.

Royal County Down can be a fearsome beast even on a benign day but with a southerly wind, gusting close to 30mph at times, it jumped up and bit 22-year-old Dawson, just when he looked to be cruising to what was still an impressive, wire-to-wire victory.

Six ahead of England’s Alex Fitzpatrick overnight, the big Waterford man bogeyed the third and birdied the short seventh to lead by five.

But as Fitzpatrick double-bogeyed the eighth and tripled the ninth, eventually shooting 76 to tie for fourth, Dawson got his first warning that this would be no walk in a park when he also lost a ball off the ninth tee and made a double bogey to turn in two-over 37.

Perhaps it was the fact he had extended his lead to seven shots over Gleeson and Gough that he was lulled into a false sense of security.

But while he insisted that he never got ahead of himself, even when he birdied the 13th from 15 feet to go seven shots ahead of Gleeson on seven-under-par, Royal County Down still had her say.

After a bogey at the par-three 14th, he blocked his approach to the 468-yard 15th into deep gorse, lost the ball and did well to convert a clutch nine-footer for a triple bogey seven after his fourth shot (his provisional ball) had found a deep fairway bunker and he was force to lay up in five.

“I am good at gathering myself and getting going again,” he later admitted. “From there on it was ‘keep it in play’. That seven I took at the 15th really brought me back down to earth.”

A nervy bogey at the 17th could have proved crucial but Gleeson did him a favour by three-putting from 40 feet a double bogey six, allowing the eventual champion to go the last with a four-shot lead.

While Gough posted a 70 that included an eagle two at the fifth to set the clubhouse target at two-over 286, Dawson rolled in a six-footer for an adventurous closing par five for a six-over 77 and a four-shot victory on two-under 282 as Gleeson shot 71 to tie for second.

“I’m speechless really,” said Dawson after his first major win since he won the Irish Boys Amateur Open in a playoff five years ago. “There have been a few sleepless nights the last couple of nights, and I am just relieved. That’s the word.

“I have just been knocking on the door for so long. I have so many top 10s in these championships, especially in match play. I have gotten to quarter-finals and semis and been beaten on the last. It was nice to do it over four rounds, especially at a venue like Royal County Down.”

What pleased him more than anything was getting a monkey off his back by claiming a big amateur win. “There were a lot of players with championships and I wasn’t one of them, which really bothered me,” he said.

“I feel very relieved knowing that all the stuff I have been working on has been the right stuff. This will give me a lot of belief.”