US Open could face problems from tribe of Shinnecock Indians 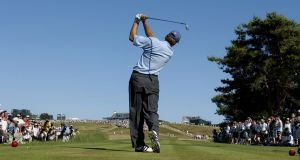 Retief Goosen tees off on the ninth hole on his way to winning the 2004 US Open at Shinnecock Hills. Photo: A. Messerschmidt/Getty Images

The second United States Open, in 1896, was played at the Shinnecock Hills Golf Club, a course situated on a strip of Long Island once owned by the Shinnecock Indians and built by a Shinnecock work crew.

At the 1896 US Open, two teenage residents of the nearby tribal grounds played in the event. For generations thereafter, the Shinnecock worked at the golf club as groundskeepers and caddies. When the championship returned to Shinnecock Hills in 1986, 1995 and 2004, the tribe continued to partner in various ways with the United States Golf Association, which conducts the tournament.

But, with the US Open headed back to Shinnecock Hills next month, the relationship between the tribe and the USGA may be fraying.

In recent weeks, the USGA and the tribe have been trying to find meaningful ways to involve the Shinnecock in the event. But those discussions have reached an impasse in the last few days.

“The talks have broken down at this point,” Lance A Gumbs, one of seven members on the Shinnecock tribal council that has met with USGA officials, said Wednesday night.

That was news to the USGA.

“We haven’t been notified or informed that there’s an impasse,” said Craig Annis, who directs the USGA’s communications and community affairs and has participated in the talks with the tribe.

Annis added, “We hope that we’ll be able to celebrate our championship together.”

The two sides have exchanged proposals, and last week the USGA sent a letter outlining its offer on how to include the Shinnecock Nation during the tournament, which will attract a vast, global collection of fans from June 11th to June 17th, including practice rounds.

When the details of the USGA’s plans for the Shinnecock were disseminated to parts of the 1,500-member tribe this week, there was dissatisfaction with many elements, according to tribal members briefed on the discussions who requested anonymity because they were not authorised to speak publicly about them.

A prominent sticking point appears to be whether the Shinnecock Nation will benefit financially from the highly lucrative tournament. In past years when the US Open was played at Shinnecock Hills, the tribe made as much as $100,000 renting out part of its adjacent land for parking or for hospitality tents.

This year, the Shinnecock land is not expected to be used for those purposes.

The USGA has focused on publicly and substantially recognising the Shinnecock during the event, something the organisation says has not been done previously.

“Our entire objective has been to talk about what opportunities exist to meaningfully celebrate the contributions they’ve made to the golf course and the community, and certainly to honor their heritage,” Annis said.

The USGA also wants to include the Shinnecock in the event’s opening ceremonies and during the trophy presentation at its conclusion. And the USGA has suggested other ways that the tribe could generate income during the championship, such as inviting the Shinnecock to sell a locally made product in its massive and usually mobbed merchandise tent.

“We’ve had great success with locally made products in past years — they’re a fan favorite wherever we go,” Annis said.

Annis added that the Shinnecock had also asked to set up a tent and a display for a putting simulator manufactured by a tribal partner. The USGA agreed to find a high-traffic place for the tent.

Talks between the sides may yet renew.

“We’re going to do our best to act in good faith,” said Gumbs, who declined to elaborate. – New York Times service

1 Johnny Sexton aware of how Ireland can offer fans an escape
2 Extremes of sweet and sour for Solskjaer as Man United show signs of revival
3 Arsène Wenger: Arsenal was a matter of life and death to me
4 Bennett girding his loins for impossibly unpredictable Vuelta
5 Stockdale and Ringrose on board with expansive Irish game plan
Real news has value SUBSCRIBE