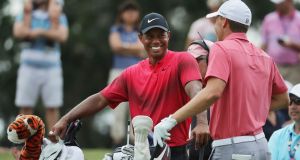 A relaxed Tiger Woods chats with Jordan Spieth during the final round of The Players Championship at TPC Sawgrass in Florida. Photograph: Richard Heathcote/Getty Images

It has been a disorientating experience these past few weeks reading the Tiger Woods biography while at the same time watching him improve round by round on the golf course. It’s difficult to square the golf fan’s desire to see him to make his comeback real with the constant reminders of just what sort of a contemptible dude he was back when he was the world’s greatest sportsman.

Master of the universe Tiger Woods is a hard man to root for.

Leaving aside all the extra-marital stuff, it’s clear from Jeff Benedict and Armen Keteyian’s meticulously sourced book that when he was at his best and playing golf at an altitude that took the breath from everyone he competed against, he was a rotten human being. Not that this is a huge revelation to anyone – it’s just that the detail is stomach-turning at times.

The Tiger Woods of the majority of the book is arrogant, aloof and unnecessarily cold with pretty much everyone in his life. Maybe weirdest of all, he was also pathologically cheap. PGA Tour officials used to go around tipping locker room staff and waiters and such with €100 bills, so embarrassed were they by his meanness and so frightened were they to broach it with him. Not only was it not a good look for the world’s richest athlete, it feels like a particularly telling character trait taken in the context of everything else.

There’s plenty more in there, from the way he ended relationships with coaches, caddies and early girlfriends to his appalling treatment of the people whose house he rented in Augusta in the early days. Throw in all the still-murky dealings with renowned HGH peddler Anthony Galea and the picture of Woods that emerges from the book – none of which has been disputed apart from some of the Galea stuff – is of a thoroughly dislikeable, surely irredeemable figure.

And yet, when he drew to within four shots of a stalling Webb Simpson on Sunday at the Players Championship eight days ago, it’s hard to imagine there was a golf lover alive who wasn’t urging him on. It was nothing against Simpson – it could have been anyone at the top of the leaderboard. It was just that standing on the 13th tee, Woods had six birdies and no bogeys on his card and all you wanted was for the charge to keep charging and the old times to roll again.

The allowances we make for great sporting feats are probably limitless, truth be told. A theme that runs all the way through the book is just what a stretch normal must have been for Woods growing up.

His life was truly weird from his very earliest months, when Earl Woods would secure him in his high chair and have him watch his father showing him his swing every night at dinner time. There’s a line in the book that says by the time Woods hit his first birthday, he had spent anything up to 200 hours watching his father swing a golf club. How would you be normal?

One of the weirdest gigs this line of work has ever provided was to be in Augusta in 2010 when Tiger Woods made his comeback. It was to be his first time on a golf course – his first time out in public in any guise – since the previous November when . . . well, you know since when. It probably looked from the outside like you couldn’t have dreamed up a more incongruous place on earth to be talking about something so tawdry as a sex scandal. Trust me, Augusta was more than up for it.

Augusta National, as everyone knows, is Narnia. Augusta, Georgia, the city itself, is so very much not Narnia. It is a blue-collar town in the American Deep South, where the biggest employer is the US Army and the rest of the population gets by as best they can. When the Masters comes to town each spring, everyone gets in on the hustle, whether they’re renting out their house or peddling ripped-off merch out in the car parks. It’s all just a matter of degrees.

Directly opposite the players’ entrance that year stood a chap wearing a sandwich board advertising a jewellery shop. All week, all day each day, he stood there, waving merrily at the honking cars as the passed down Washington Road. “PULLED A TIGER?” said his sandwich board. “LET US SMOOTH IT OVER FOR YOU!”

That was the week that an aeroplane flew above Augusta carrying a banner behind it that read: “Sex Addict, Tiger? Yeah! Me Too!” It was the week security at the course – fearful of an embarrassing confrontation – went up to a woman in the crowd and asked the immortal question: “Sorry Ma’am – are you a stripper?” The lady said she certainly was not and then giggled as he left. “I’m not sure how I should feel about that,” she said.

Again, how would you be normal? How would you live the life around which all that madness orbits without being in some way broken? And in the end, does any of it matter? Instinctively, you’d say yes, it does. Or at the very least, you’d like to think it does, that you’d reserve your adulation for people you reckon deserve it.

But then he goes on a charge and it’s thrilling like sport is supposed to be thrilling and you wonder where it leaves you at all, at all.

Sport is many things. Simple it is not.

Leicester go top at halfway point; It’s not the time for IRFU to be slashing salaries 06:54
Gordon D’Arcy: Time for IRFU to be bold and secure futures of prized playing assets 06:00
Van Graan outlines challenge Munster faces against Leinster’s ‘pressurised game’ 06:00
Bundee Aki’s Connacht return could come against Ospreys on Sunday 06:00
Seán Moran: Improvisation may be on the cards again for fixture makers 06:00
Here is your handy guide to sport on television this week