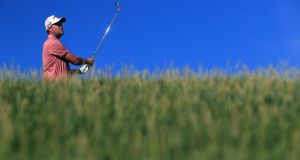 Australia’s Marc Leishman plays his tee shot on the 12th hole during the second round of the AT&T Byron Nelson at Trinity Forest Golf Club in Dallas, Texas. Photograph: Tom Pennington/Getty Images

Australian Marc Leishman backed up his lowest round on tour with a five-under-par 66 on Friday to take a one-stroke lead over fast-closing American Aaron Wise at the AT&T Byron Nelson in Dallas.

Early-starter Leishman rolled in six birdies, including a 55-footer at the 12th, against one bogey, to finish at 15 under at Trinity Forest Golf Club after his sparkling 61 on Thursday.

South African-born Wise, who started hours after Leishman, came close to catching the Australian with an eight-under 63.

Six birdies and an eagle put the 21-year-old at 14 under, a stroke ahead of American Brian Gay, whose nine-under 62 was the low round of the day.

Americans Jimmy Walker (67), Eric Axley (65) and Kevin Na (65) shared fourth on 11 under, while former world number one Adam Scott of Australia (65) was in a group of five players one shot further back.

Ireland’s trio of golfers in action all missed the cut, with Pádraig Harrington and Graeme McDowell only slipping outside the cut mark late in the day as it moved to four under.

Harrington had earlier carded a one-under 70, while McDowell recovered from starting with three bogeys to card a one-over 72. Séamus Power missed out after making bogeys on the 17th and 18th, slipping back from four under to two under after signing for a three-over 74.

Leishman found the links-style Trinity Forest, the tournament’s new home, much to his liking.

“I enjoy this type of golf,” the world number 16 told reporters. “It reminds me of back in Australia.

“I like how the ball is running out on the fairways. I’m reading the greens well and I’m hitting the ball well.”

Leishman said there was a big difference in him shooting a four-over 76 in the final round of last week’s Players Championship and his play in Dallas.

“My speed has been really great,” he told the Golf Channel. “Last week at The Players I hit a lot of really good putts that lipped out, and this week they’re going in.

“Some weeks you read them really well, and some weeks you’re not sure if a 10-footer is slightly uphill or downhill, and that affects your speed and line and everything.”

Wise, who tied for second in the Wells Fargo Championship two weeks ago, said he used the Australian as an incentive. “I saw Marc Leishman way up there at 15 under and I started the day at six [under] so I knew I had a long ways to go,” Wise told PGA Tour Radio.

“It was nice when I started getting it going to see his numbers still ahead of me so I could keep chasing and chasing. Even though I was playing tough, I felt like I had to go get him a little bit, which was fun.”

Gay had as many birdies as Leishman on Thursday, 10, but a bogey at the par-four fourth spoiled his chances of equaling Leishman’s round.

Six of his birdies came on the back nine.

“My putting has been really down the last month or two, and that’s my strong suit, so I have just been waiting for it to turn around,” Gay admitted.

Hometown favourite Jordan Spieth found improvement with a solid 66 but was still eight strokes off the pace on a low-scoring day.