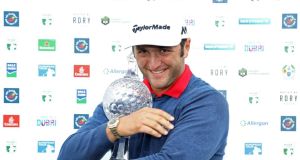 Jon Rahm is the current Irish Open champion after taking the title at Portstewart in 2017. Photo: Matt Mackey/Inpho

Paul McGinley’s love affair with the old course at Lahinch – where he won the South of Ireland title back in 1991, prior to embarking on a hugely successful professional career – will take on a new dimension with the decision to stage next year’s Dubai Duty Free Irish Open at the Co Clare venue.

A number of other links courses – including Portmarnock Links and Co Sligo - were also in the frame to stage the megabucks tournament, part of the European Tour’s lucrative Rolex series, but McGinley’s association with Lahinch and a slick bid from the club ensured its selection as host venue.

The DDF Irish Open – with a minimum prize fund of $7million – has been hosted by Rory McIlroy in recent years with visits to Royal County Down, The K Club and Portstewart in recent years. This year’s tournament takes place at Ballyliffin in Co Donegal in July, while the 2019 staging will mark Lahinch’s first time to play host to the tournament.

As the tournament enters a new era next year, with McGinley heading a rotation of Irish golfing champions – featuring Major winners Darren Clarke, Pádraig Harrington and Graeme McDowell – also on the role of host in future years, taking over the mantle from McIlroy. The four-time Major champion’s charity, the Rory Foundation, has successfully hosted the tournament since 2015.

McGinley will be aided in his preparations for the 2019 event by his close friend and one of his vice-captains during the 2014 Ryder Cup at Gleneagles, Des Smyth, who was recently announced as Tournament Ambassador, a role which will see him help in the marketing and promotion of the event for the next four years as well as aid a successful transition between each of the hosts.

The 2019 Dubai Duty Free Irish Open – which will take place in the first week of July – will also represent the first year of a partnership between the European Tour Foundation and the respective hosts to provide a programme of charitable support across the country. This innovative concept will enable the European Tour Foundation to focus on creating a powerful longer-term vision.