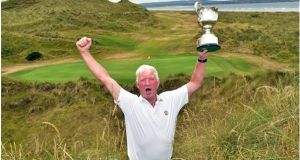 Naas veteran Kelly entered the final round with a two-shot cushion but dropped three shots on the front nine to fall one behind Tuam’s Alan Moran. Disaster struck for Moran at the 10th where he ran up a triple bogey seven while Kelly caught fire on the back nine, making eagle at the par-five 14th and birdies at 13 and 15 to card a final round 72.

Kelly had previously won the Irish Seniors Close in 2009, 2010, 2014 and 2015. His triumph at Enniscrone marks his fifth victory in the event making him the most successful player in the championship since it was introduced in 2009.

Tramore’s John Mitchell took the category prize for the over 60s. Tralee’s Michael Coote was best in the over 65 category and Peter Cowley from Cork led the over 70s.

Former West of Ireland champion Noel McGrane from The Royal Dublin produced the round of the tournament, carding a glorious, seven-under-par, course record 66 in the second round which included a hole-in-one at the eighth. The Royal Dublin player holed a six-iron from 170 yards for his ace to go five-under for the day and picked up two more shots on the back nine

Portumna’s Suzanne Corcoran retained her Irish Senior Women’s Close Championship at Monkstown Golf Club when she beat The Heath’s Catherine Reilly 3 and 2 in the final.

Despite losing the first hole Reilly was all square by the turn but fell two down by the 13th and could not come back from there.

Corcoran beat Donabate’s Pat Doran in the semi-finals, while Reilly beat The Island’s Gertie McMullen 4 and 3 to reach the decider.

Galway’s Liam Nolan holed a 20 metres bunker shot on the 18th hole to win the 2018 Leinster Boys Amateur Open title in dramatic fashion at The Heritage. Following impressive rounds of 71, 71 and 72 Nolan finished one shot clear of overnight leader Max Kennedy from Royal Dublin who shot 70, 71 and 74 for a one under par 215.

Last year’s champion Aaron Marshall (Lisburn) carded rounds of 74, 68 and 76 to finished third on countback and also claim the Under 17 Category from Connemara’s Luke O’Neill (73, 70, 75).

The Golfing Union of Ireland have selected a squad of seven boys for the McGregor Trophy at Kedleston Park, on July 17-19th.

Morrison made the cut in 2017 and finished in a tie for 23rd place. Joshua Hill qualified for this year’s tournament based on his result at last year’s Reid Trophy (English Under-14 Open), where he shared sixth place.

Played over 72 holes, across three days, the top 40 and ties will progress to the final day after a 36-hole cut. Previous winners of the McGregor Trophy include England’s Justin Rose and Italy’s Edoardo Molinari.

Joseph Byrne and Keaton Morrison have also been selected to participate at the European Young Masters. This year’s event takes place at Hauger GC in Norway from 26-29th July.

Dundalk player Brendan Lawlor collected his third title of the year on the European Disabled Golf Association (EDGA) tour with a seven-stroke victory at the Czech Masters.

And success tasted all the sweeter for Lawlor thanks to his first ever hole-in-one during the opening round. The 21-year-old from County Louth, who was born with Ellis-van Creveld Syndrome, holed out with a seven iron from 156 yards at the eighth on his way to carding a 70 and the two-handicapper followed up with 75 to finish comfortably clear of the field on plus one.

Lawlor’s win at Mst tice Golf Club in Prague completes a hat-trick on the EDGA tour this season following previous victories at the Troia Trophy in Portugal and the Pas de Calais in France. Since playing his first European event last November, Lawlor has enjoyed a remarkable run and is now poised to move inside the top five on the EDGA rankings.

The United States claimed 18 of 24 points in the final round singles matches to pull away for a 38.5-21.5 victory at the Arnold Palmer Cup at Evian Resort Golf Club. This year’s edition of Team USA is the first side to win as the visiting team since the 2010 Americans. Neither side had retained the cup since the US in 2011. The United States now leads the all-time series 12-9-1.

Ireland’s Olivia Mehaffey won the day’s first point, but the Americans responded by winning the next three. Chandler Phillips and Italy’s Lorenzo Scalise halved before Team USA ran off three more victories. The sides would record another halved match before the Internationals clamed victories by Andy Zhang and Luis Gagne.

Team USA’s Emilia Migliaccio, who was the only player in this year’s matches to tally a 4-0 record, led another American five-straight wins before Alana Uriell clinched the cup for the United States.

Mehaffey and Collin Morikawa of La Cañada Flintridge, California, were named recipients of the Michael Carter Award, which is presented to the Arnold Palmer Cup participant that best represents the qualities and ideals of sportsmanship, integrity and upholding of the game.

Justin Suh of San Jose was selected by both teams to receive the Arnold Palmer Cup exemption into the 2019 Arnold Palmer Invitational while Dylan Kim from Texas, received a wild card to The Evian Championship this September. Players selected the individual from both teams that they think best represents the “Arnold Palmer Legacy,” that is, the values that Arnold Palmer exhibited through his life in golf.

Ireland’s other players on the International team Chloe Ryan and Ronan Mullarney both lost their singles 2 and 1.

The Woodbrook Scratch Cup that was due to take place on Sunday the 18th of March has been rescheduled for Sunday next the 15th of July. Those who previously entered and wish to play on the revised date please text Nicola at 086-7811610 to confirm.

Additional entries are now being taken. The competition has a handicap limit of 12 based on the lowest 60 entrants.

1 Sideline Cut: Vignette shows why Bird is the true shark in The Last Dance
2 Sonia O’Sullivan: How to keep your competitive edge from going blunt
3 New signings eligible to play for Pro 14 clubs from July 1st
4 Coming fourth in the Olympics didn’t change this fearless quartet, time did
5 Philip Browne admits funding model for Irish rugby is not sustainable
Real news has value SUBSCRIBE