McIlroy lurks as Fox gets off to flyer in Ballyliffin 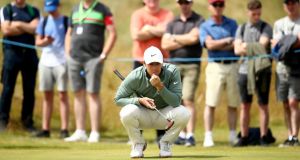 Rory McIlroy lines up a putt on the third green during the first round of the Dubai Duty Free Irish Open at Ballyliffin Golf Club. Photograph: Jan Kruger/Getty Images

To lurk, with intent; who knows, maybe – even if unintentional – it could prove to be Rory McIlroy’s best approach if he is to reclaim the Dubai Duty Free Irish Open title in Donegal this week.

For, in a first round over the Glashedy Links where he played beautifully tee-to-green, only for his putter to act as if with a mind of its own, the world number eight finished only three shots behind leader Ryan Fox, whose opening five-under-par 67 gave him sole possession of the lead.

On a day which started with grey cloud cover, before the sun broke through to portray the rugged sand hills in all of their glory, the links – with 13,716 spectators in attendance – held its own in offering a tough but fair examination: 43 players broke par, with Fox at the head of affairs, but there were others who struggled to cope with the questions asked. Defending champion Jon Rahm’s 74 wasn’t too destructive, but Rafa Cabrera Bello shot a 76 and Matt Fitzpatrick a 77 to be placed in immediate peril of missing the cut.

McIlroy, the host, hit 12 of 15 fairways which was quite an accomplishment on ground that firmed up as the day progressed. However, for all of his good work in getting to the green, his putter was not co-operative in a round that featured 32 putts. No fewer than eight of those putts were misses from inside 12 feet.

His problem with the putter was the negative from his round. The positive was how well he struck the ball, with driver and irons. It was a product of trusting his swing, trusting work he did with his coach Michael Bannon on the eve of the tournament in fixing a glitch.

On Wednesday evening he’d spent an hour and a quarter on the range with Bannon.

“We got the TrackMan out and just my path had been getting a little bit left . . . usually my bad swings are when I swing it too far to the right and get underneath it, but the whole year I’ve just been getting a little bit too far left and swinging left at impact. And if the face matches up with the path it goes left, or if it gets a bit open they get too far away from each other and I get the squirty one to the right. So just get the feeling of releasing my right arm or throwing my right arm towards the target and getting it on the right path, it was just a matter of trusting that.”

Of his putting, McIlroy tried to put his finger on it. It was the first time he’d putted on links this season. It was a case of perhaps reading too much into lines. Worried? No.

“I’d love to be able to say I’m saving them for a couple weeks’ time . . . but I’m building towards the last couple Majors of the summer and all that. What I saw out there today was really good and I just need to continue to do that and just hole a few more putts. If I could improve as the week goes on, heading into Carnoustie in that aspect, I’d be really happy. But if I can drive the ball like the way I did today over the next three days, I’ll have a good chance.”

Pádraig Harrington took on the mantle of leading the home challenge, with his opening 68; while McIlroy (70) and Graeme McDowell (71) also offered up sub-par rounds.

Shane Lowry, though, suffered late bogeys – including a three-putt on 15 and a finishing bogey on 18, after driving into the rough – to sign for 72.

“I made a few silly bogeys out there which is what’s been happening. It’s very frustrating. But the scoring’s not hectic is it? So I’ll try and get out early in the morning and shoot a good score,” said the Offaly man.

Paul Dunne, too, struggled with his game in signing for a 73. A birdie start was followed by a double-bogey on the second – where he hit a two-iron out-of-bounds – and his main problem was with the driver in hand as he pulled a number of tee-shots.

“I haven’t been doing [that] so it kind of took me by surprise, from there you are fighting to save par on every hole instead of giving yourself chances. I just didn’t know what it was,” said Dunne, who headed to the range with his coach Karl Holmes post-round to rectify the matter.

Fox’s 67 gave him a one-stroke lead over a seven-strong group of players that included Harrington, but also Lee Westwood – who played bogey-free golf – and former Masters champion Danny Willett, who has shown signs of improved form of late.

Behind them all, in close range, lurking with intent, is the host.

FIRST ROUND SCORES
(Irish and British unless stated, par 72)