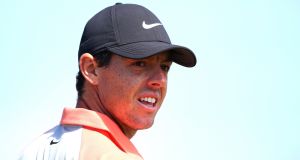 Although there are no last-minute, late additions to the Dubai Duty Free Irish Open field from those among Rory McIlroy’s personal list of mobile phone contacts – no Tiger Woods, no Rickie Fowler – the tournament at Ballyliffin Golf Club will have more world ranking points that the opposing event on the PGA Tour, the Greenbrier. It’s the biggest golf tournament on the planet this week.

Only McIlroy, the tournament host, and Jon Rahm, the defending champion, currently feature in the world’s top 10 but the global nature of the event on the Inishowen peninsula in Co Donegal, which has a €6 million purse, is reflected by the presence of players from 28 different countries.

Of the 156 players in the field, 14 of them are Irish, completed by the four players – Simon Thornton, Neil Ó Briain, Colm Moriarty and Cian McNamara – who emerged from the new 36-hole qualifying tournament held at Rosapenna over the past weekend.

Rahm, who is currently fifth in the official world rankings, is defending a title won so impressively at Portstewart a year ago. The Spaniard is one of 14 players who have already won on the PGA European Tour this season. Rahm won the Spanish Open in Madrid in April, while the most recent winner in the field is Matt Wallace who claimed the BMW International Open a fortnight ago.

For the home grown players, the DDF Irish Open represents an opportunity to claim a first official win on the European Tour this season: Paul Dunne and Gavin Moynihan, who is playing on a sponsor’s exemption, teamed up to win the Golf Sixes quickfire tournament at St Albans in May, but that was an unofficial tournament (the prize money didn’t count on the order of merit), while McIlroy’s only win this season came in the Arnold Palmer Invitational at Bay Hill on the PGA Tour.

Dunne claims this event to be akin to a “fifth Major” for the Irish players, and certainly it has grown in status in recent years to become part of the European Tour’s big chip tournaments that are part of the Rolex Series.

“The tournament itself is massive now with it being on the Rolex Series and with such a committed sponsor like Dubai Duty Free. They have, along with Rory obviously, taken it to a new level over the past few years and it’s brilliant to see the tournament getting back to the way it was with huge crowds, great fields and big prize money,” said Shane Lowry, who has returned from his US base in Florida to commit to the European Tour for the immediate future.

Where there was a drought of Irish winners prior to Pádraig Harrington claiming the title in 2007, ending a winless run of 25 years going back to John O’Leary’s success in 1982, there have been three home winners in the last 11 stagings: Harrington (2007), Lowry (2009) and McIlroy (2016).

“It will always have a special place in my heart for obvious reasons. It launched my career when I won it as an amateur and I would love nothing more than to win it again as a pro . . . it’s one of those weeks on tour that you have to adapt to. For most of the Irish lads, you need to treat it like a massive event because you have so much on so you actually need to prepare differently to most other weeks,” admitted Lowry.

The Irish Open is the fourth of eight Rolex Series events on the European Tour schedule for 2018, all with prize funds in excess of €6 million. It is part of a mid-season links swing that will also take in next week’s Scottish Open followed by the British Open. There are three places available for the Open at Carnoustie for those players not already exempt who finish in the top 10 at Ballyliffin.