Lowry finds week of Irish Open difficult ‘as the harder you try, the harder it is’

McDowell has change of heart and will play in Scottish Open 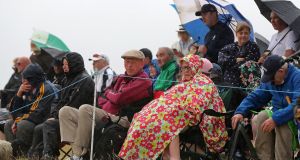 Spectators sheltering from rain during the final day of the Irish Open at Ballyliffin Golf Club. Photograph: Niall Carson/PA Wire

“It’s my own fault for letting it get to me,” said Shane Lowry of self-inflicted mental wounds, the type that raise expectation levels only for the fall to be hard and very, very sore.

Any chance of Lowry getting into the mix at the DDF Irish Open perished in Saturday’s third round when his putter turned rogue and his final round was over by the time the leaders were teeing off.

“I said at the start of the week I was going to try and be better, but the harder you try the harder it is. I get in my own way at times, but what can I do?” wondered Lowry after a closing round 70 for 286, two-under-par, which left him adrift in tied-28th position.

“You’re out there and trying so hard to do well and possibly trying too hard, and I’m wanting it too much. I find this week quite difficult and quite draining to be honest, and I’m looking forward to a few days off. I haven’t seemed to learn from the last five or six years,” said Lowry of how he has failed to cope with the demands of the week.

“I’d be lying if I said it was a very enjoyable week, and that’s no disrespect to anyone. It’s a tougher week than I normally get; it’s weird because I love playing in front of the Irish people, but I try my best and I try probably too hard to do well for them and for myself and for my family.”

Lowry hasn’t factored in the Scottish Open into his schedule, which will mean a week off – doing some corporate work but mainly practising – ahead of competing in the 147th Open at Carnoustie, but there was a change of heart from Graeme McDowell who has decided to play in Gullane after all.

McDowell’s mind had been muddled and befuddled about his intentions on whether or not to play in the Scottish Open: he gave serious consideration to withdrawing his name from the field, which would have meant forfeiting any chance at winning a late exemption.

“I’ve played so much golf and there’s no point quitting now when we have more Open spots [available at the Scottish Open] next week. It’s the Last Chance Saloon...I slept on it and think it’s important that I go there and be focused. There’s no point giving up now.

“I was slightly frustrated [on Saturday] and I have changed my mind. Frustrated is probably overstating it a little bit. My game was so close and I was feeling a bit of fatigue in my body, I was maybe overreacting,” said McDowell, who signed off with a closing 71 for 288, level par, for tied-40th position.

Paul Dunne also shot a 71 for 288. Still working on elements of his swing, the Greystones player claimed he was headed in the right direction in moving on to the two events in Scotland.

“The Open is a massive event, but so is the Scottish Open, a seven million dollar purse, lots of points to get into the Race to Dubai. So they’re both big events, it’s not like one of them outweighs the other significantly. Obviously you’d rather do well in The Open, but it’s one of those if I can have a good finish or a win in either of them I don’t really mind which one.”

Simon Thornton – who earned his place in the field after winning the pre-tournament qualifier – closed with a 74 for 290.