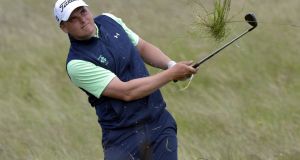 An SOS call was put out for ropes to use for crowd control, such were the size of the galleries which descended on the famed north Dublin links of Portmarnock for Friday’s play of the 124th edition of the British Amateur Championship. And 22-year-old Cork man James Sugrue, the player who brought the crowds like iron filings to a magnet, didn’t disappoint as he progressed to the 36-holes final against Scotland’s Euan Walker.

Sugrue, the strapping 6ft 2in plus-four handicapper from Mallow, showed remarkable powers of resilience to salvage his morning quarter-final to beat Dutch man Koen Kouwenaar at the 19th but then produced a blockbuster performance to down the highly-touted Australian David Micheluzzi, ranked seventh in the world, in the semi-finals, winning 3 and 1.

Seeking to become the first Irish player to win the famous old championship since Alan Dunbar triumphed in 2012, Sugrue – a noted GAA player in his youth and who has taken to having hurling puck-abouts with his caddie Conor Dowling on the Portmarnock beach in the evenings to relax – has moved within touching distance of earning invitations to play in next month’s British Open at Royal Portrush and next year’s US Masters and US Open, the grand prize which awaits the winner of the final duel.

“You think about it in bed at night. It’s a bit of a cliché but you do. In amateur sport, it’s probably the best prize you can win is this, to get to play in the Open, the Masters. When you say it, it sounds a bit weird but having the chance to do it is great,” said Sugrue, an Irish international whose biggest win came in the south of Ireland in 2017.

Sugrue, ranked 249th in the world amateur rankings, has impressed with a superb short game and a masterclass in putting to reach the final shootout: the 36-holes final tees off with the first round at 8.30am, with free admittance to the course and free parking making it one of the best free shows in sport.

1 Gerry Thornley: Saracens very late to apologise for repeated cheating
2 Conor McGregor hails Donald Trump as ‘USA goat’
3 Champions Cup final: How to get there, how to get tickets and more
4 As the UK tightens gambling laws Ireland still lags way behind
5 Shane Lowry agreeing to play in Saudi Arabia is an unfortunate choice
Real news has value SUBSCRIBE