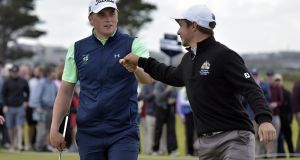 Mallow’s James Sugrue fist bumps his opponent David Micheluzzi of Australia after both birdied the 14th hole during the semi-final of the British Amateur Championship at Portmarnock Golf Club. Photograph: Pat Cashman

What was it Sam Torrance used to say about players stepping out of the shadows in Ryder Cups? In truth, this 124th British Amateur Championship at Portmarnock Golf Club – where large galleries have walked the fairways with the stars of the show – couldn’t be further removed from that biennial cash cow, but the wonderful rawness and pureness of the duels here have proven enthralling from first shot to last.

James Sugrue, for one, has moved his way into the limelight. Ranked 249th in the amateur world rankings, the 22-year-old Corkman has emerged as the star of the show but managed to keep his feet on the ground. Instead, he has let his clubs do most of the talking with some superb shot-making, wonderfully soft hands in the short game department and a putter which, more often than not, has been obedient.

Add in resilience. Sugrue’s back was up against the wall in his morning quarter-final when he trailed Dutchman Koen Kouwenaar by one hole as he walked up the 17th fairway. His tee shot had finished in one of those devilishly steep-banked bunkers and his only recourse was to take his punishment and splash out. Left with 132 yards to the pin, he hit his approach to eight feet and sank the par putt for the unlikeliest of saves.

There was better to follow, though. On the 453 yards Par 4 18th, Sugrue managed the initial challenge of finding the fairway and then hit his approach to 12 feet. Kouwenaar scrambled a par, but it wasn’t sufficient to close the deal. Sugrue rolled in a 15-footer for birdie, to loud roars from the ever-growing gallery.

“The putter was fairly hot. I have been waiting for it all year. I have been striping it around but having 37, 38 putts and not getting the most out of it. Today at least on a fairly big stage, the putter was hot,” said Sugrue, who completed his comeback when beating the Dutchman at the 19th.

In the semi-final, an entirely different challenge faced him. David Micheluzzi, a 22-year-old from Melbourne, had the distinction of being the top-ranked player in the championship. The world number seven is, it seems, destined for a bright future on the professional circuit when he makes the move, most likely later this year. But Sugrue, as he has done all week, took it all in his stride.

Not even when Micheluzzi audaciously sank a 60-footer for birdie on the sixth hole did Sugrue flinch. His reaction was to hole his own eight-footer to halve the hole.

“That was a bit mad, I was just laughing. You can’t get angry for [him] holing a putt or anything. I play strokeplay but in certain situations you have to give yourself a bit of a nudge that you are playing matchplay. Play your own ball and you won’t go too far wrong,” said Sugrue.

Sugrue went one-up at the eighth where his opponent was bunkered and failed to save par and moved two up through 10 holes when playing a wonderful up-and-down for a winning par. Again, Sugrue’s short game genius was evidence where he made par from off the back and Micheluzzi, who’d missed the green left, failed. Sugrue had moved three up.

The portents of a fightback started on the 13th where Sugrue hit one of his few loose shots, his drive pushed right close to the gorse and with little option but to chop out of the rough. His third found a bunker and suddenly the deficit was down to two.

When Micheluzzi sank a 15-footer for birdie on the 14th, the roars from his fellow Australian golfers – very much out-numbered in the gallery – provided vocal support. But Sugrue’s response was again assured, and he rolled in a 10-footer for a birdie of his own. The fist-bump between the two players at that moment indicated the mutual respect, and Sugrue booked his place in the final when playing the 17th, into the wind, to perfection.

“I wasn’t really thinking about impressing anyone. I just kind of let it flow, see what happens. It’s only golf, nothing too scientific or hectic. Just take it one shot at a time,” said Sugrue of a philosophy that has stood him well so far.

The final challenge is against Scotland’s Euan Walker, who outdueled England’s Ben Jones by 2 and 1 in the other semi-final; Jones having earlier accounted for Galway’s Ronan Mullarney in the quarter-finals.

The 36-hole match will get underway at 8.30am on Saturday morning and the prize for the new champion is one of the most prestigious of all amateur championships and exemptions into the British Open, US Masters and US Open.